Hong Kong, 2015 – B1A4 successfully held their concert in Hong Kong on 29th November 2015 at Asia World Expo. The group, which debuted in 2011, started the concert with ‘In The Air’  and ‘Solo Day’, accompanied by a sea of green created by Hong Kong BANA’s light sticks.

Hong Kong fans who have been waiting for years finally got to meet B1A4 during this concert, which was part of B1A4’s World Tour in 2015. What made the fans pleasantly surprised was that all members used Cantonese to introduce themselves during the talking segment. You could see that they have prepared and learnt well before meeting their Hong Kong fans. After the self-introduction, the group then proceeded with ‘What’s happening’. The group then continued the concert with many of their hit songs like ‘OK’､ ‘Lonely’ and ‘Sweet Girl’. Dressed in white suits, it felt like 5 Prince charming was present to spend a 2 hour concert with the Hong Kong BANAs.

For every song that B1A4 performed, the fans recited the fan chants really loudly and in unison, making B1A4 really touched and surprised, also giving them more energy to perform. While performing ‘Pretty’, B1A4 members began distributing roses to their fans, charming their fans as they do so.

Nearing the end of the concert, the members shared their thoughts on their visit to Hong Kong and meeting their Hong Kong Fans. CNU, ‘I’ve always wanted to come to Hong Kong. Knowing that we have so many fans in Hong Kong, I’m so thankful.’ Baro added, ‘It’s the world tour right now and we have been to so many counties, but Hong Kong is the best!’, resulted in huge cheers among the fans.

Before the encore, fans lifted banners which they prepared beforehand. The banner wrote ‘The first date in 4 years’, making this very date a special, unforgettable and grateful one.

It is B1A4 first concert in Hong Kong and the members have been practicing Cantonese beforehand. ‘I Love everyone’, ‘Tonight is a unforgettable night’ , ‘Everyone have to remember this’ and ‘Last Song’, all these sentences seemed to be of no difficulty to the members. 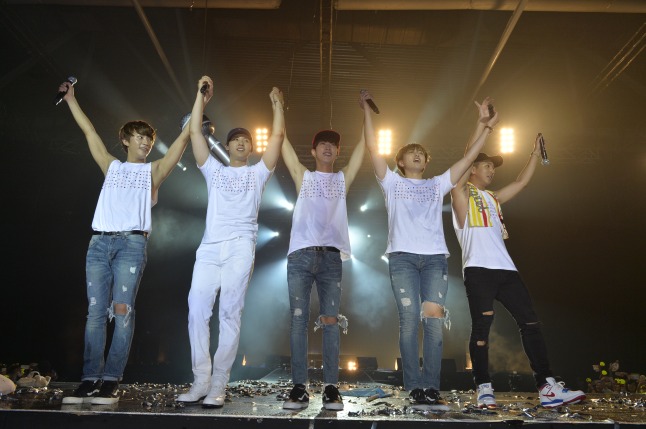 During encore, all of them changed into T-shirts and sang ‘Beautiful target’, ‘Baby good night’, ‘You’re a girl I’m a boy’ and ‘A glass of water’. When they are singing ‘A glass of water’, all the fans sang along with the members. The members also playfully sprayed each other and themselves with water, making almost everyone happily drenched. The concert then ended on a high note with both fans and B1A4 spending an enjoyable 2-hour concert together.

We would like to thank JACSO Entertainment for the invitation to cover this concert!