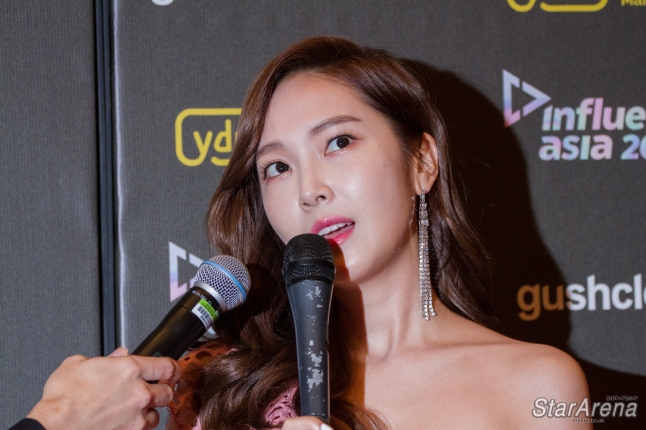 Winners for the awards show were decided through closed door silent peer-to-peer voting by the Top 4 nominees in each category; Food, Health and Fitness, Beauty, Lifestyle, Fashion, Parenting, YouTube Channel, YouTube Personality and Breakout Influencer. A whopping total of 252 social media influencers participated in the event. For Influence Asia 2017, Vietnam and South Korea were added to the list of participating countries making it seven countries in total, including; Singapore, Malaysia, the Philippines, Indonesia, and Thailand.

Korean pop star Jessica Jung was featured at Influence Asia 2017 as the headline act for the awards show. The event started with a press room where the artists walk across the red carpet for a short interview in front of the media. Jessica stresses the importance for individuals to do what they want and follow where their passion brings them.

The awards show which lasted for 4 hours is supported by lots of special presenters from overseas which includes Lily Maymac, Judy and Benji Travis, Carli Bybel, Shannon Harris and much more! There are also special performances by The Lion City Boy (from Singapore), Tulus (from Indonesia), Noo Phuoc Thinh (from Vietnam) and Jessica Jung (from South Korea).

In a cute pink dress, Jessica graced the awards show to present the biggest award of the show, the Influencer of the Year award!

With a change of outfit, Jessica appeared back on stage at the end of the award show to perform 2 of her top singles, Fly and Wonderland. She held an adorable stage fueled by the fans’ never-ending cheers.

Since Jessica’s birthday is on April 18, the fans even surprised her with a birthday song after her performance. She was so shocked and smiled adoringly at the fans, relaying how thankful she is. She even uploaded a picture on her Instagram stories after the show to thank the fans for all that they have prepared.

The Influence Asia awards show is a biannual award show and this is the second awards show following the first one held in Singapore in 2015. I am sure the fans are anticipating the lineup for Influence Asia 2019 – and we wonder where it would be held next!