END_OF_DOCUMENT_TOKEN_TO_BE_REPLACED

Hong Kong, 2020 – Apink is coming back to Hong Kong to meet the Hong Kong PANDA again! Rolemodel Entertainment Group (REG) and D-SHOW Entertainment Limited have just announced to bring all of you < Welcome to PINK WORLD 2020 Apink Concert in Hong Kong> on 28th March 2020 at AsiaWorld-Expo, Hall 10. Tickets priced at HKD $1,888(VIP), $1,388, $1,088, $788 and $588, will go on public sale in mid-February via Cityline and Tom Lee Music Stores. END_OF_DOCUMENT_TOKEN_TO_BE_REPLACED

Singapore, 2018 – Come September, K-pop fans in the region can look forward to the event of the year – ​HallyuPopFest ​2018​, the biggest K-pop music festival of its scale organised in Southeast Asia. Held at the Singapore Indoor Stadium from 7 to 9 September, Friday to Sunday, the music extravaganza will welcome over 100 K-pop Idols. Fans can keep their eyes peeled for a line-up of exciting performances from Wanna One, Taeyeon, BTOB, Apink, MOMOLAND, NCT 127 and many more. The three-day K-pop festival will be hosted by Korean-American Singer-Songwriter, Eric Nam. END_OF_DOCUMENT_TOKEN_TO_BE_REPLACED 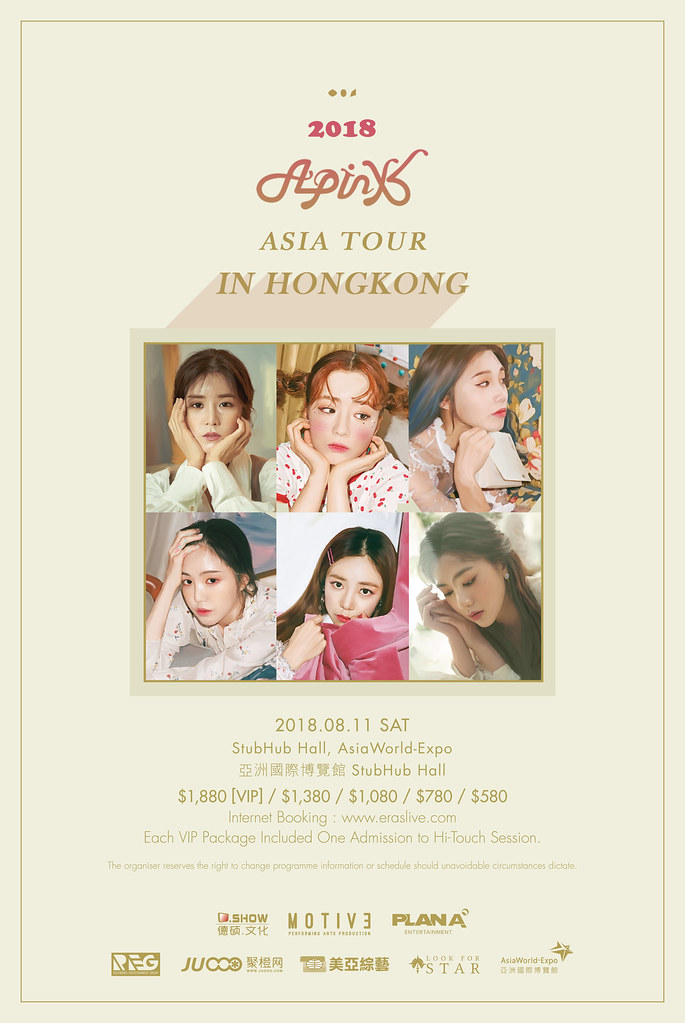 Hong Kong, 2018 – Apink is coming back to Hong Kong after their last year’s show to meet the Hong Kong PANDA again! D.Show Entertainment Ltd. and Rolemodel Entertainment Group (REG) have just announced that  <2018 Apink Asia Tour in Hong Kong> will be held on 11th August 2018 at StubHub Hall, AsiaWorld-Expo. Tickets will go on public sale starting from 10am Thursday, 21 June 2018 onwards via ERAS (https://www.eraslive.com). END_OF_DOCUMENT_TOKEN_TO_BE_REPLACED

Singapore, 2018 – CALLING ALL K-POP FANS! Save the dates for #HallyuPopFest on your calendar right now – the ONLY music festival you’d want to attend this year, with over 100 K-pop idols performing in Singapore!

END_OF_DOCUMENT_TOKEN_TO_BE_REPLACED

Hong Kong, 2017 – “We will always be together, we will miss you!” said Apink, the Korean girl-group under Plan A Entertainment, guaranteed PANDA (official fanclub name) that they would see one another in the near future. Rolemodel Entertainment Group (REG) has just announced that they will be bringing Apink’s <2017 Apink Asia Tour [Pink UP] in Hong Kong> on 23 September 2017 in AsiaWorld-Expo Hall 3.

END_OF_DOCUMENT_TOKEN_TO_BE_REPLACED 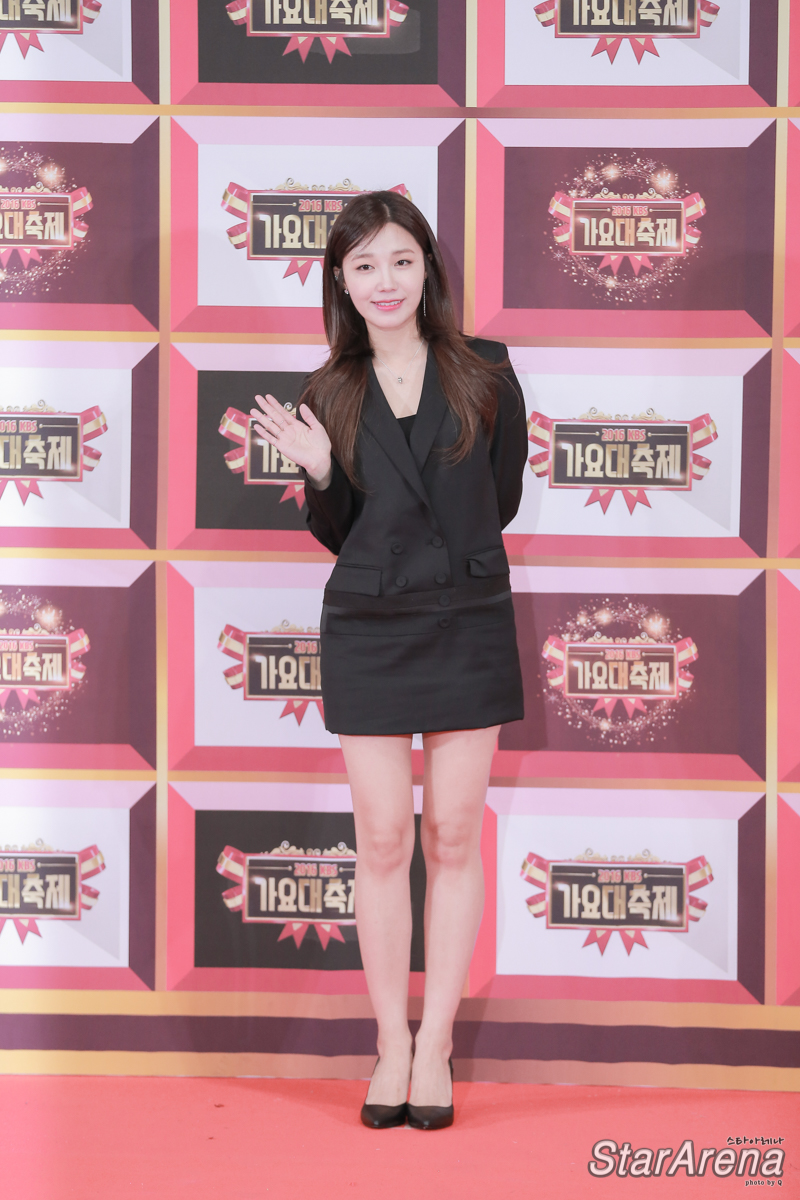 END_OF_DOCUMENT_TOKEN_TO_BE_REPLACED

Cat 1 VIP Ticket Launch Details
Date: Saturday, 20th February 2016
Time: 10am to 5pm
Venue: BIG BOX (Level 1 Information Counter – Next to Hyper Mart Side Entrance/Taxi Stand Entrance) 1 Venture Avenue, S608521
Cat 1 VIP Ticket Price: S$288.00 (Cash Transaction ONLY. Please bring along exact change.)
Number of Tickets Per Pax: Each Person is entitled to purchasing a maximum of 4 tickets at the ticket launch at BIG BOX.
Photo-Op & High Touch: All Cat 1 Ticket Holders are guaranteed to EITHER a High Touch Pass (400 pax) OR Group Photo-Op [20pax per photo](400 pax) with Apink via a Lucky Draw.
*Details for High Touch & Photo-Op will be announced at a later date.
*Please note that tickets are sold on a first come first serve basis while available. Any unsold Cat 1 VIP tickets will be available via www.megaboxtickets.com on 23 February.

KUALA LUMPUR/ SINGAPORE, 22 JULY 2015 – MTV has revealed its first wave of performers today with Korea’s favorite K-pop idol female group, Apink and hottest Japanese band, SEKAI NO OWARI to perform for the first time at MTV World Stage Malaysia, which is set to take place at Surf Beach, Sunway Lagoon on Saturday, 12 September 2015. Recorded live for global telecast, the one-night only outdoor event is one of the biggest Southeast Asia music nights of the year, which brings multi-genre talents onto a single stage. More acts will be announced in the coming weeks.

“This is our first performance on MTV World Stage. Thank you MTV for inviting us. We are excited about meeting our fans out there and seeing other artists too. We will always try to better ourselves and bring you good music!” – Apink

“We are thrilled to take part in the MTV World Stage. Our sounds are unique and we look forward to meeting our fans in Malaysia and are excited to see the reaction from the rest of the audience. So come join us at MTV World Stage Malaysia… it’s going to be a spectacular show in Kuala Lumpur!” – SEKAI NO OWARI

Greetings from SEKAI NO OWARI: “http://media.mtvnservices.com/embed/mgid:uma:video:mtvasia.com:1221500

SEKAI NO OWARI means ‘end of the world’. Armed with an unusual name matching their unique sounds which leave a lasting impression both visually and musically, SEKAI NO OWARI is currently one of the most popular and skilled creative groups in Japan. Comprised of four members: sound producer, lead guitarist and band leader, Nakajin; lead vocal and concept maker, Fukase; stage producer and pianist, Saori; and DJ LOVE, the clown masked DJ in charge of sounds choice and comedic talk, SEKAI NO OWARI is ready to take their originality to music fans in Southeast Asia for the first time.

Apink is currently one of the most idolized K-pop girl groups formed by A Cube Entertainment in 2011. Known for their sweet and innocent image and street style that has captivated fans around the world, the award-winning group consists of Park Cho-rong, Yoon Bo Mi, Jeong Eun-ji, Son Na Eun, Kim Nam Joo, Oh Ha Young.

Apink made a comeback with the recent release of their second album in three years, “Pink MEMORY” and title track “Remember” on 16 July. Within a day, they topped all the major Korean music charts, including MelOn, the biggest music streaming site in Korea, positioning them well to be one of the hottest this summer.

MTV World Stage Malaysia 2015 is presented by Sunway and supported by Tourism Malaysia. In Malaysia, it is ignited by Xpax, brought to you by Brickfields Asia College, Watsons Malaysia and supported by local broadcast partner, Astro. The show will premiere on MTV in Asia on Saturday, 26 September at 1.30pm (TH/WIB), 2.30pm (PH/SG) and 3.30pm (MY), Saturday, 10 October at 9pm (JP) and Sunday, 11 October at 12am (KR).

Apink started in 2011 with Son Na Eun, who was featured in Beast’s “Soom”, “Beautiful” and “Niga Jeil Joha” music videos in late 2010. Park Cho-rong, who appeared at the end of Beast’s “Shock” Japanese music video, joined next, as the group’s leader. This led to the addition of Oh Ha Young and Jeong Eun-ji, where the latter was introduced through a video of her singing a rendition of Jennifer Hudson’s “Love You I Do”. The final two members, Yoon Bo Mi and Kim Nam Joo, were introduced through the group’s reality show, Apink News.

The group has since gone on to release five Korean extended plays and one studio album. In April 2011, Apink released their first extended play (EP), “Seven Springs of Apink”, and performed a song from it, “Mollayo”, on Mnet’s M! Countdown. In the same year, they also released their first digital single, “It Girl” and a second EP, “Snow Pink”. Their rise was quickly recognized when they were awarded the “Best New Female Artist” at the 13th Mnet Asian Music Award and the “Idol Music Rookie Award” at the 19th Republic of Korea Culture and Entertainment Awards in the same year.

The group has also performed live and on TV shows, including some members appearing on TV drama series.

The girl group popularity is clearly acknowledged well in the industry. With more than 20 music awards and more than 25 music program awards under the belt, their accolades have included “Best Newcomer Artist” at the 26th Golden Disk Awards, “Newcomer Award” at the 21st Seoul Music Awards, “Hot Performance Award” at the 3rd Gaon Chart K-pop Awards and the “Top 10” at the SBS Music Awards last year.

The hottest Japanese band started at a live music venue called club EARTH, which they created and managed on their own. They all lived there together creating music and discussing the future of the group. They even tore down the old walls to put up soundproof walls around the venue. Today, their passion and deep connection to each other has led to their status as one of the premier music acts in Japan.

Evolving at an incredible speed, most recently, they worked with Dan the Automator, an American hip hop producer (producer of Gorillaz’s debut album), and released the soundtrack, “ANTI-HERO”, the theme song for the highly-anticipated Japanese live-action movie, “Attack on Titan” last week. The movie will be released around the world in August (Part 1) and September (Part 2). “Attack on Titan” originated from the manga series, which has sold over 40 million copies in Japan since 2009.

SEKAI NO OWARI released their newest album, “Tree” in January 2015, which peaked at #1 on the Japan (Oricon) albums chart, which was also certified 2x Platinum sales in Japan after a month of its release. On 18-19 July, they performed a sold-out two-day show, “Twilight City” to about 140,000 fans at the Nissan Stadium, Japan’s largest venue.

Their originality and unique ideas are portrayed through “Tokyo Fantasy”, a concept that is of a large-scale fantasy, making attending the band’s live performances feel like a theme park, transporting fans to a completely different reality. This concept has been lauded all around the Japanese music industry.

In 2014, they held a major live music event which featured the popular American act OWL CITY as a special guest. Concurrently, SEKAI NO OWARI was featured in OWL CITY’s worldwide release“TOKYO”. They have also worked with renowned Dutch DJ/ Producer Nicky Romero on the release of their English single, “Dragon Night”.

In 2013, they released “RPG,” which has reached more than 73 million views on YouTube. In the same year, they performed their first outdoor live event, “Fire and Forest Carnival” to 60,000 fans over a 3-day period. Over the past four years, they have been consistently recognized in the Japanese music industry.

MTV is presenting an opportunity for up and coming Malaysian acts to showcase their talents as Malaysia’s #MostWanted Act at MTV World Stage Malaysia. Local artists or bands keen to participate can submit their interest via worldstage.mtvasia.com from 13 – 26 July. From 30 July – 14 August, fans can show their support by hashtagging their preferred local band or artist they want to see perform at MTV World Stage Malaysia 2015. Based on fans’ votes and other performance criteria, Malaysia’s #MostWanted Act will perform as the opening act at the show.

MTV also announced the launch of a new Asia multi-platform campaign MTV Breaks ignited by Xpax, which gives talented millennials across Asia* the chance to kick-start a career in the creative industries by offering life-changing opportunities through a mentorship stint** on MTV World Stage Malaysia 2015. Launched globally at last year’s MTV EMA, it is the first time this highly successful property aimed at creating economic opportunity for talented millennials, is being launched with an Asia version in the region.

MTV Breaks by Xpax is offering big ‘breaks’ to three talented, young creatives who will get the opportunity for a stint as a photographer, content creator or motion graphics designer at this year’s event. The selected candidates will be mentored by experts within the industry and the MTV team. Selected candidates will have their work featured on various MTV platforms.

For more information on how to apply, visit worldstage.mtvasia.com. The deadline for entries is 13 August.

MTV World Stage passes are not for sale and may be won by fans through game contests that will open on 28 July. Details will be announced in the coming weeks.

In the weeks ahead, fans can get direct information by following MTV Asia on Facebook, Twitter and Instagram for news updates on MTV World Stage Malaysia 2015.