Hong Kong, 2017 – “We will always be together, we will miss you!” said Apink, the Korean girl-group under Plan A Entertainment, guaranteed PANDA (official fanclub name) that they would see one another in the near future. Rolemodel Entertainment Group (REG) has just announced that they will be bringing Apink’s <2017 Apink Asia Tour [Pink UP] in Hong Kong> on 23 September 2017 in AsiaWorld-Expo Hall 3.

Apink held their first Hong Kong fan meeting in February earlier this year and they kept their promise to meet Hong Kong PANDA after half a year. Tickets to this upcoming show will go on public sale starting on Thursday, 3 August 2017 10am via Cityline and Tom Lee Music Stores.

Apink had just made their comeback on 26 June with their new mini-album Pink UP. The title song ‘FIVE’ has taken the music scene by storm, hitting the #1 spot across various charts and music programs. The members have now kept their promise that they would come back for Hong Kong fans and of course, the 6 members are really excited for their upcoming Asia Tour [Pick UP] in Hong Kong concert this coming September. 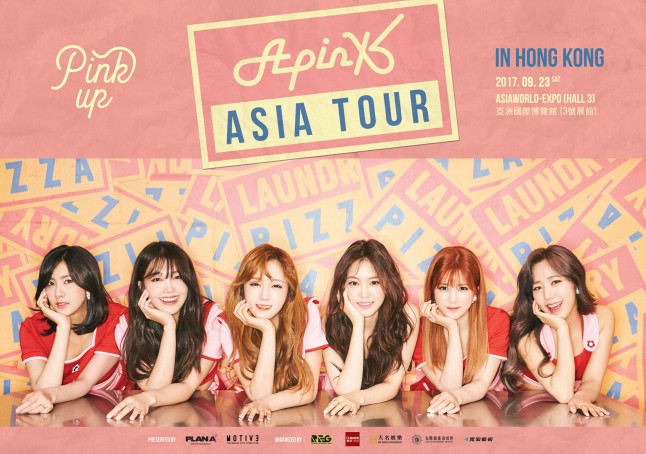 Details
Event: 2017 Apink Asia Tour [Pink UP] in Hong Kong
Date: 23 September 2017 (Saturday)
Time: 7PM
Venue: AsiaWord-Expo Hall 3
Ticketing hotline:  2111 5333 (10:00am – 8:00pm)
Ticketing website: http://www.cityline.com
Ticket prices: HK$ 1,880 (VIP*) / $1,380 / $1,180 / $880 (ALL SEATED ONLY)
*VIP ticket holders are entitled to Hi-Touch or Group Photo Session after the show, or receive a special package with an autographed poster and one of the official merchandise. VIP ticket holders can check out which privilege they are entitled to via REG’s Facebook page (https://www.facebook.com/reg.entertainment/) one week before the show.