Hong Kong, 2017 – On the 11th and 12th of February, EXO held their EXORDIUM tour in Hong Kong. They proved their popularity once again as both concerts were sold out within hours. Not only did EXO performed their best, EXO-L fan support was one of the highlights of the concert as well.

With strong intense lighting, the opening of the concert started off with a blast. They performed hit songs like MAMA, Wolf and Call Me Baby much to the fans delight. During the talking segment, all members greeted their fans in mandarin. Sehun, who insisted on using only mandarin, spoke quite a bit compared to the other members which made the fans really happy.

The second segment had a lot of unexpected special stages. During the performance of Artificial Love, Lay and Kai danced in masks. Chanyeol and Lay even did the accompaniment for other members while they sang My Lady, Moonlight and Monodrama. Since they performed the Chinese version of Monodrama, the fans readily sang together with the members which created a singalong atmosphere.

EXO-L showed their support with various fan support projects. For the concert on 11th February, during their One and Only stage, fans raised huge light slogan with the words “EXO you are my one and only” written on it. The members looked very touched when they saw it.

On 12th February, while the members are performing GirlxFriend, love letter designed slogans were raised and during Song for you VCR, EXO-Ls turned on their blue diamond light ring, turning the concert into a sea of blue diamonds which was very impressive.

EXO also had a lot of water-related dance stages for their tour this time round and the members joked that they always had to carry along extra undergarments for change. They even teased Suho asking him why doesn’t he seem to get wet. His answer was even more hilarious, stating that it is because his power is water.

Xiumin apologized for not doing so well during his performances, as he was hit by the water and it was really cold so he missed some steps. 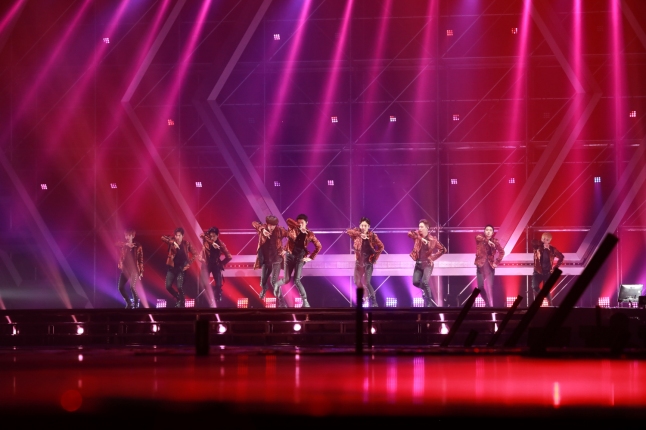 Before the concert came to an end, Chanyeol presented the crowd with an OST of ‘Goblin’. To the delight of fans, Lay also did an impromptu song live! As they had to leave for Korea straight after the concert, the members relayed their regret for not having much time with the fans but they cherished every little interaction they had with the fans. They also try to put on as many accessories that the fans gave and waved to every single fan they could.