Singapore, 2017 – Multi-talented actor, Lee Joon Gi, came to Singapore for the first time ever for a fan meet on March 4 as part of his <Thank You> Asia Tour Fan Meeting. The fan meet was part of the line-up for the HSBC Women’s Champions Music Festival which was held at the Sentosa Golf Club.

As soon as the actor came up on stage to perform his first song, “Lost Frame”, the whole venue erupted in cheers. He blew up the stage with his dynamic dance moves and energetic stage presence. Throughout the whole fan meeting, Lee Joon Gi never fails to hype up his fans by constantly asking them to cheer and enjoy themselves. “Raise up your hands Singapore!” he shouted frequently. 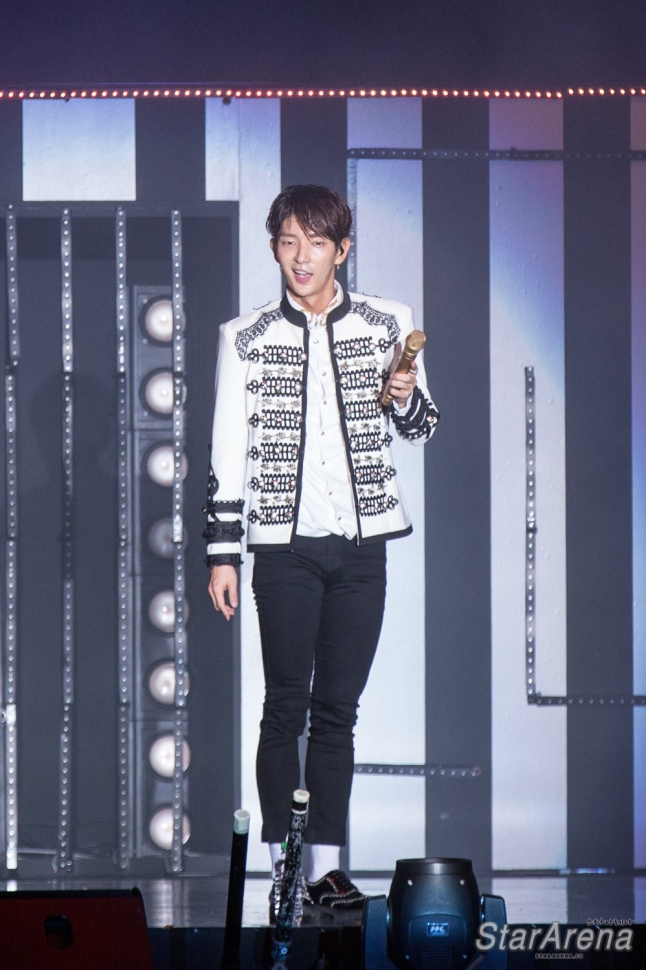 Lee Joon Gi performed several hit songs like “Compliment Me”, “Ma Lady” and “Born Again”. He even covered popular songs by Bruno Mars, “I’m Yours” and “Geek in the Pink” that made all the fans sing along together with the actor.

He even brought in a lot of laughs with his quirky antics. Not only was he dancing to “Pen Pineapple Apple Pen”, he also teased his fans throughout the fan meeting with sexy dances. The videos that were shown during breaks brought much laughter to the audience as well. He even had an embarrassing moment when he sang out of tune during one of his performances, which caused him to laugh hilariously non-stop. “Once I laugh, I cannot stop. So please stop laughing!” he pleaded while trying to control his laughter.

After his rising popularity starring in the drama, “Moon Lovers: Scarlet Heart Ryeo” as one of the princes called “Wang So“, he is occasionally referred as “Wang So” by his fans. Some fans even screamed “Wang So” to him on stage, showing their love and support for the drama. To give back to the fans for supporting his drama, Lee Joon Gi happily sang to “For You”, an OST from the popular drama.

Lee Joon Gi proves that not only is he an amazing actor, he is also an awesome performer. He came back on stage for the encore performances and danced to “Sexy Back”. Not only that, he also proves how multi-talented he is by showing his talents in DJ-ing. He even performed to PSY’s “Gangnam Style” and several popular Big Bang songs. He even fulfilled fans’ requests by dancing to TWICE’s TT rather cutely much to the delight of his fans.

The whole fan meet experience was amazing as Lee Joon Gi showed off his energetic self throughout the 2.5 hours long fan meet. His humble and warm self is well depicted and I can feel his immense gratitude towards his fans. After the whole experience, I am sure that his fans are wishing for the next time Lee Joon Gi comes back to Singapore!

Special thanks to UnUsUaL Entertainment for the invitation to cover Lee Joon Gi “Thank You” Asia Tour Fan Meeting in Singapore.