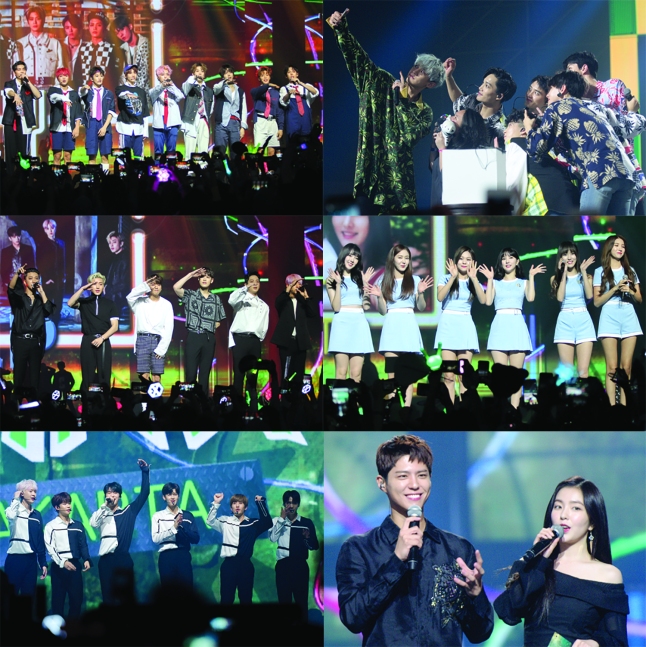 Jakarta, 2017 – KBS shook Jakarta once again with KBS Music Bank in Jakarta 2017. Following their success in 2013 by bringing various artists such as Super Junior, SHINee, Infinite, 2PM, Sistar, B2ST, Teen Top, and Eru, this time they attracted K-Pop fans from all around Indonesia with EXO, NCT127, B.A.P, Gfriend, and Astro as well as MC Park Bogum and Irene!

NCT127 got the first honor to pump up the venue with intro dance and ‘Firetruck’. Without delay, they continued with ‘Good Thing’ before saying hello to their fans in Bahasa Indonesia. “We will continue to work on our Bahasa Indonesia,” Taeyong told the audiences, bashful about their broken words. They kept the venue burning with ‘0 Mile’, ‘Limitless’, and ‘Cherry Bomb’. Jaehyun screamed with a big grin, “You guys are so hot!” 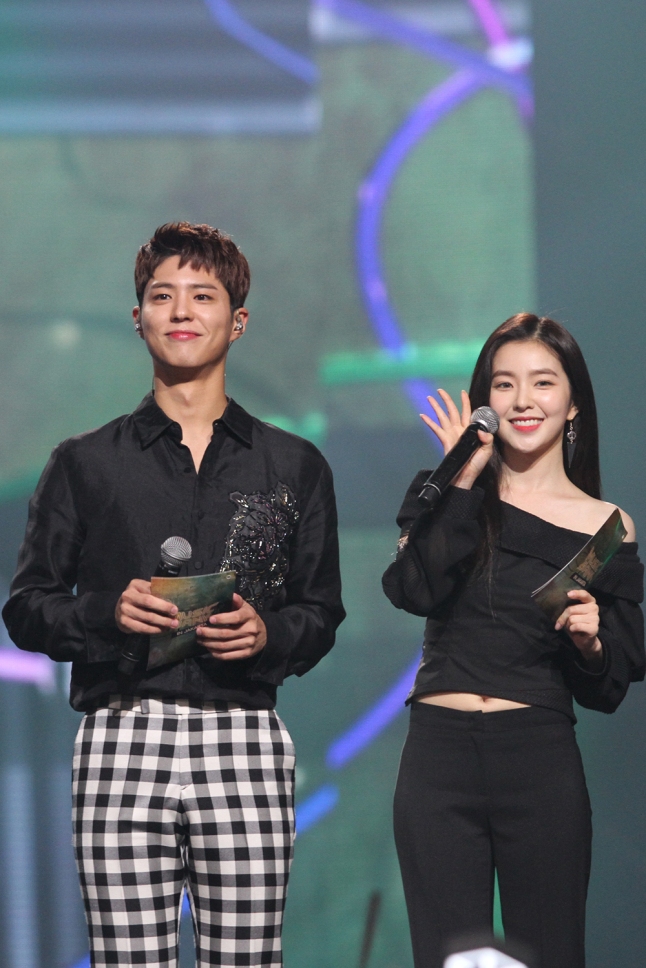 While waiting for the next performer, MC Park Bogum and Irene asked Indonesian MC, Lolita Augustine, which K-dramas she likes. She mentioned ‘Descendant of the Sun’, ‘Goblin’, and ‘Love in the Moonlight’. Seeing this opportunity, she also requested Bogum to sing a bit of an Indonesian song he had sung at his fan meet in Indonesia. The audience sang along ‘Untukku’ with him, making the girls swoon with his voice.

As if a cue to next performances, BAP’s Daehyun and Youngjae came to the stage to sing the OST of ‘Descendant of the Sun’, ‘Talk Love’, gaining screams from fans. GFriend’s Yuju and EXO’s Chanyeol made a mellow collaboration with ‘Stay with Me’, OST of ‘Goblin’. Love was totally in the air!

Astro made the audiences dance with ‘Baby’. Flaunting their fluency in the language, they greeted the fans with loud and clear Bahasa Indonesia. Not only that, they also sang a line from an Indonesian song, ‘Kesempurnaan Cinta’ followed by making big hearts upon their heads. Jinjin brought fans to laughter with Indonesian trendy catchphrase, “Tercyduk!”. Proving their love for Indonesia fans, they performed energetic moves with ‘Breathless’, ‘Puss in Boots’, and ‘Polaris’. “Please support our activities in the future!” they ended their performance with ‘Always’. 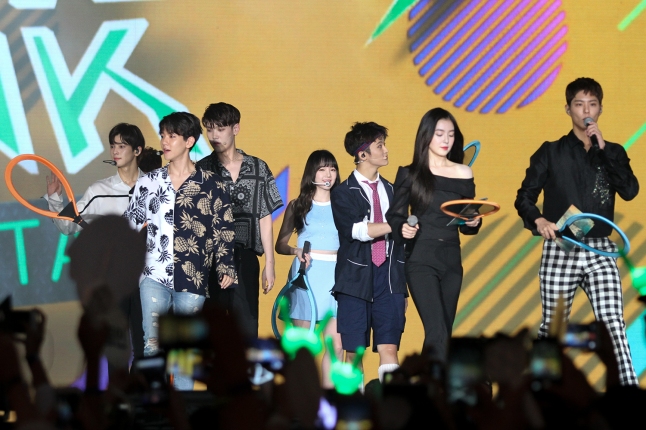 Bogum, Irene, NCT127’s Mark, B.A.P’s Zelo, EXO’s Baekhyun, Gfriend’s Yerin, and Astro’s Eunwoo came out together with cute badminton rackets to support 2018 Asian Games in Indonesia. They were given ‘fortune shuttlecocks’ and they opened them one by one to read their fortune. “Always be healthy and successful in all activities,” said EXO’s Baekhyun’s shuttlecock. Upon opening his, Bogum said that he would like to come back to Indonesia once again.

Not losing from boy groups, GFriend fired up the venue with ‘Rough’ and ‘Navillera’. They expressed their excitement in coming to Indonesia for the first time and the audience’s enthusiasm during their performance. During this talking segment, they also hinted an upcoming fan meeting in Indonesia! Not letting the mood drop, they continued with cheerful songs ‘Me Gustas Tu’, ‘Fingertip’. “Let’s have fun together!” Umji cheerfully asked the audience as they performed their last song, ‘Love Whisper’.

Music Bank wouldn’t be special without covers of local songs. GFriend’s Eunha, Astro’s Sanha and Eunwoo did covers of songs of Mocca, a local band which is also widely popular in Korea. Eunha filled the venue with her sweet voice as she sang ‘I Remember’, while Sanha and Eunwoo swooned the audiences with ‘Be Happy’. The audiences, feeling familiar with those songs, cheerfully sang along with them through the segment. 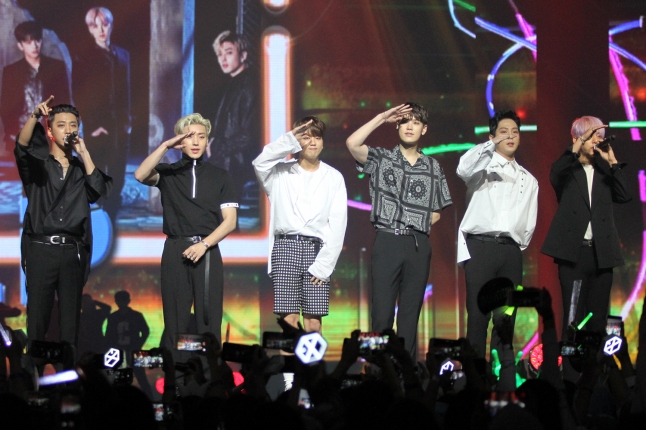 Screams for BAP soared upon their appearance with ‘Wake Me Up’. The venue immediately fired up with the group’s debut song, ‘Warrior’. The stage turned into a dance floor with the song ‘That’s My Jam’, making the audiences dance with the flow. Audiences followed Youngjae’s command to “boom clap boom boom clap” to the next song, ‘No Mercy’. Their next performance, ‘Bang x2’ brought fans to rock mood.

It was finally “K-pop Jukebox” time! NCT127 performed once again with their cover of SHINee’s ‘Lucifer’ and Super Junior’s ‘Sorry Sorry’, hyping the venue with legendary songs. GFriend freshened up the stage with Seventeen’s ‘Pretty U’, BTS’s ‘I Need You’, and EXO’s ‘Growl’.

Anticipation wasn’t contented anymore as the fans filled the venue with chants of EXO‘s name. Fans immediately sang along as the last performer of this event began with ‘Ko Ko Bop’ and ‘The Eve’. Just like other artists, EXO tried to greet fans in Bahasa Indonesia one by one, but Suho had a hard time reading the cue card. “Bahasa Indonesia is really hard,” he said regretfully. Using this chance, EXO picked a sheet from a box to choose a lucky fan who will go up to the stage to take a picture with them. After two failed attempts, they finally reached a winner. She got the chance to take a selfie with EXO, how lucky!

“Please hold your lightsticks up,” leader Suho asked the fans before they continued with ‘Tender Love’. During ‘Heaven’, Sehun playfully got closer to fans and also took a few of fans’ phones to take a few selfies. “Sing together!” D.O hyped up the venue as they got the audience to sing and dance along with ‘Lotto’, earning loud chants as they performed the last song.

At the end of the event, all artists came out together and expressed their gratitude to Indonesia fans before they sang together DJ DOC’s ‘Run to You’ as the closing song. We also hope you all the best!

We would like to thank Star Media Nusantara as promoter and Yes24 ENT as official ticketing partner for the invitation to cover this event.