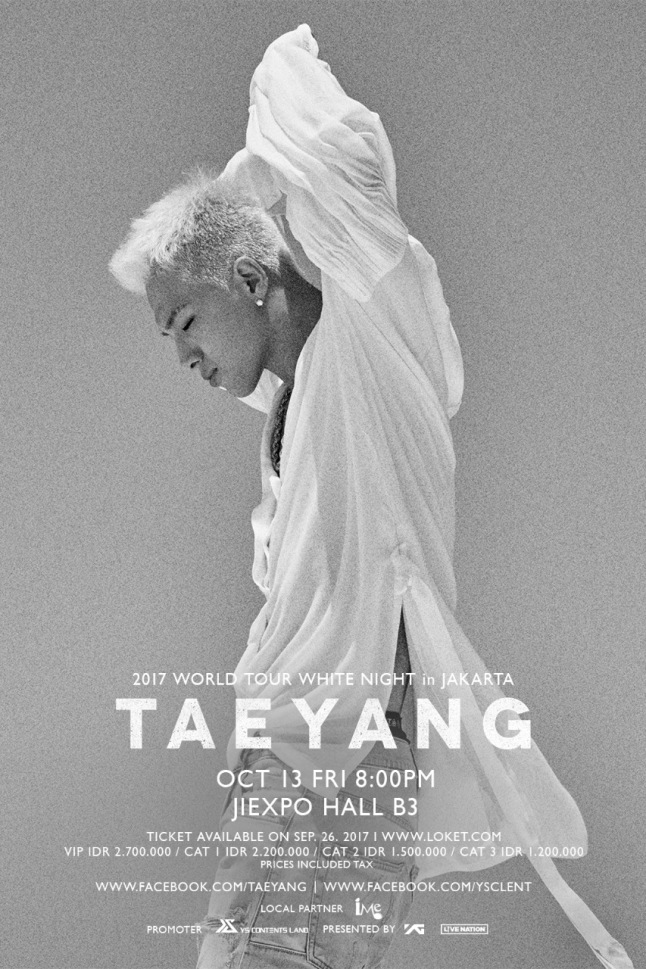 Jakarta, 2017 – Be ready as TAEYANG is coming back to Jakarta! YG Entertainment confirmed that TAEYANG would hold his second world tour “TAEYANG 2017 WORLD TOUR “WHITE NIGHT” in JAKARTA on October 13th at JIEXPO B3 HALL. TAEYANG recently finished the US and CANADA tour successfully and is performing in Asia.

The meaning of “WHITE NIGHT” is a natural phenomenon where the hot summer sun never sets. It also refers to TAEYANG, who has consistently walked a path of passionate music for a long time. He started his “HOT” solo tour in 2008 continued with “SOLAR” in 2010 then “RISE” in 2014. Combining all the tour names it will create “HOT SOLAR RISES AND SHINES ETERNALLY IN WHITE NIGHT”.

TAEYANG is a songwriter and dancer, who made his debut in 2006 as a member of South Korean boy band BIGBANG, and he was the first member of BIGBANG to step out from the group as a solo artist. He debuted with “HOT” in 2008 with two singles “Only Look at Me” and “Pray”, received praise from the world. His first album winning the award for Best R&B/Soul Album and “Only Look at Me” win Best R&B/Soul Song. In 2009, TAEYANG began to showcase his talent for composing songs and writing lyrics on his digital single, “Wedding Dress”. He released his first full album “Solar” on July 2010 in two versions a Regular and a Deluxe Edition. The deluxe edition had 13 songs including songs from “HOT” album. Limited to only 30,000 copies, the deluxe edition album sold out on the first day of release. Both of the albums peaked at number one position on Gaon Album Chart and he won the “Best Male Artist” award on 2010 Mnet Asian Music Awards.

Preceding his second album “Rise”, in 2013 he released digital single “Ringa Linga” which was drawing attention for his signature soulful voice and dance, as well as hip-hop swag. In “Rise” album TAEYANG involved himself and produced six tracks. This album reaching 112 on the Billboard Hot 200 while topping the Billboard World Albums Chart and Heat seekers Albums Chart, selling 3,000 copies. With this successes, he released another two singles to promote the album “Eyes, Nose, Lips” and “1AM”. Later on, he collaborated with G-DRAGON to release the song “Good Boy” for YG Entertainment’s new hip-hop project. The song debuted at number one position on Billboard‘s World Digital Songs chart, receiving positive reviews, with Fuse naming it one of best songs of the year.

After 3 years of waiting, he came back with new album “WHITE NIGHT” with “Darling” as the title and “Wake Me Up” as a sub-title song recently. The album achieved number one ranking on Billboard world music chart. TAEYANG 2017 WORLD TOUR WHITE NIGHT is just around the corner; so do not miss this performance highlighted with TAEYANG vocal prowess, free styled moves and other charms that will make an unforgettable night.