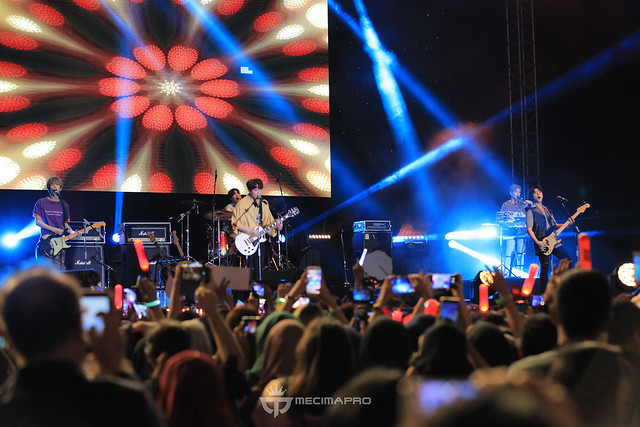 JYP Entertainment’s band DAY6 opened the concert at 6:30 PM straight with ‘I’m Serious’, ‘Dance Dance’, and continued their performance with ‘You were Beautiful’. This is the second time Sungjin, Jae, Young K, Wonpil, and Dowoon come to Jakarta. Previously in August, they had a fan meeting. “Last time we had a fan meeting in Indonesia, but it’s nice that we met again, right?” said the leader Sungjin. Young K too, approved what Sungjin said and he also added that DAY6 was really happy to be back to Indonesia that soon.

And it was unexpected that DAY6 performed Indonesia band NOAH’s ‘Separuh Aku’ in a fluent Bahasa Indonesia. “We’ve given a gift to all of you and we are finally coming to our last songs. Are you guys ready to jump?” Jae shouted to ask the audience to jump on the next song. And so, their performance ended with ‘Sing Me’ and ‘Freely’. Jae even got down and greeted the fans who were super excited to sing along with them.

After DAY6 finished their stage act, lovely boy Eric Nam started his session with ‘Body’, then continued his performance with the song ‘You, Who’ which is a collaborative song with Jeon Somi. He also greeted fans with very fluent English, even approached the fans to the edge of the stage after the crowd sang happy birthday to him. “Thank you all for singing a song with me. You are very special. This is my most beautiful birthday gift,” said the singer who just celebrated his birthday on 17 November.

The handsome multitalented artist admitted that he had worried about having a little to none support for performing in Indonesia, but witnessing that the fans were very welcome to him, he couldn’t help but feel grateful to Indonesia fans. He was also funny while interacting with the translator behind the stage, “Oh I do not know where you are. Thank you.”

The night was going late but the atmosphere inside was getting more intense as Dean performed ‘Put My Hands on You’. “Nice to meet you all here, I’m Dean and I’m here to have fun. Are you ready? To enjoy this event, I will tell you one way to do it. Let’s practice the jump!” said Dean before sang Fanxy Child song.

Dean who just celebrated his birthday on 10 November thanked the fans who sang happy birthday. “A few days ago I spent my birthday. Thank you for singing for me. The next song is very sad,” said Dean who immediately brought ‘What 2 Do’ to the stage, which showed his vocal abilities. Then before singing the song ’21’, Dean asked the male and female audience to scream, resulted the female fans scream were louder. He also asked the audience to turn on the flashlight on their phone and turn off the spotlight towards him, while performing the song ‘Half Moon’.

Dean teased the fans by leaving the stage. But not long after he appeared again on stage which was immediately greeted by hysterical screams from the fans. He ended his amazing live performance with ‘Bermuda Triangle’.

After a very intense stage from DAY6, Eric Nam and Dean, the audience were once again swooned by LeeHi’s beautiful performance. She serenaded the fans with ‘Breath’ and ‘Rose’ and was stunned because the whole venue sang together with her.

“Do you guys enjoy this show? Before the third song, I didn’t expect to be going so far to sing my songs with you guys. It’s my first time to Indonesia so I don’t know whether you like me and my song. Does everyone’s here like me and my song? I am so glad that you guys can sing my songs, ” said Lee Hi who then sang ‘World Tour’. She continued her performance by singing ‘Rose’, ‘World Tour’, ‘Hold My Hand’, ‘My Star’, ‘I’m Different’, and ‘1 2 3 4’.

The last performer succeed in painted the concert venue with red when the fans lifted their Konbat! iKON then hit the stage with ‘Sinosijak’ and ‘Rhythm Ta’. After that one by one member again greeted fans with Bahasa Indonesia and introduced themselves, started from DK to Bobby.

The same thing also expressed by Yunhyeong, “Indonesia apa kabar? Saya Yunhyeong. Ini adalah kali kedua kami datang ke Jakarta. Karena kami penampil terakhir jadi kita semangat bersama-sama ya (trans: Indonesia how are you? I am Yunhyeong. This is our second visit to Jakarta. Because we’re the last performer so let’s have fun together). ”

Junhoe said, “Saya adalah Junhoe dari iKON (trans: I am Junhoe from iKON).” Then the leader, B.I also greeted the audience in Bahasa Indonesia “Oke apa kabar? Nama saya B.I, senang bertemu dengan kalian (trans: Okay, how are you? My name is B.I, nice to meet you guys),” he said.

iKon then continued to perform by singing ‘My Type’ and ‘#WYD’ and shook the stage with ‘Bling Bling’ and ‘B’Day’, as well as ‘Dumb & Dumber’ as the encore.

We would like to thank Mecima Pro for the invitation to cover this event.