The show, which was held at The Coliseum Hard Rock Hotel Singapore, was filled with dedicated fans of all ages. Since this is their first time to perform in Singapore, Monsta X prepared something special just for the fans – past photos of the members throughout their time as Monsta X. They reminisce and talk about all the past memories as well as the good times, all thanks to their fans – Monbebe.

Monsta X performed several songs that include “Beautiful”, “From Zero” and “White Candy”. They showed cool dance moves and perfect vocals. During their “White Candy” performance, they even threw candies to the crowd. This had fans all excited and jumpy as they try their best to catch some candies. Those that managed to catch some sure are lucky!

The show consists of many different activities for fan interactions. There was even a segment for the Monsta X members to showcase their drawing skills. All members are tasked to draw what they would eat with Monbebes, within one minute. The competition was close, but in the end, the fans chose I.M as the winner due to his hilarious answer and drawing – water. Or maybe the fans just wanted to see I.M doing aegyo as part of his reward!

The boys gave amazing fan service to their lovely fans as they try hard to make sure the fans feel loved. During the show, a lucky fan even got a chance to get serenaded by I.M. He sang her favorite Monsta X song, but faced the screen as he was too embarrassed. All the fans began swooning at his amazing vocals and adorable antics.

Much to the surprise of Monsta X, there was even a special segment made by the fans just for Monsta X! They had a fan video screening and prepared a special ramyeon cake for the birthday boy, Wonho. All the fans and the members sang a birthday song and celebrated Wonho’s birthday together. I am sure it is a birthday he will never forget since he gets to celebrate it with his fans in Singapore. 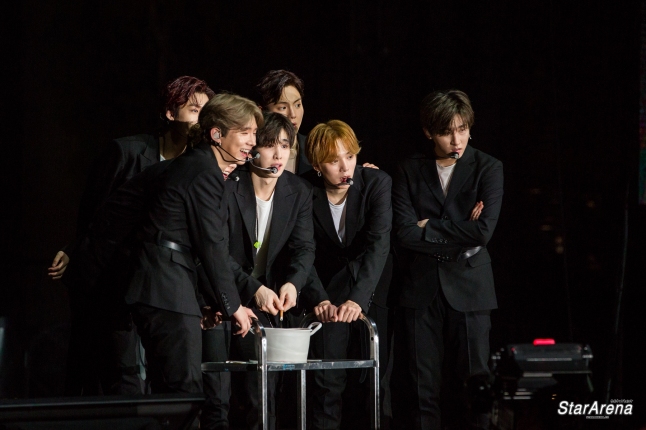 Concerts must always come to an end as the boys began to hint that they have only a few more songs left. This definitely dampens the mood of the fans but the boys’ continuous energy does not leave the fans sad for long. They continue to perform their very best even till the last song. They even sang a beautiful acapella version of “Dramarama”.

As the show draws to an end, the members share their inner thoughts and appreciation for the fans. “You guys won’t be tired if we come often right? We will come here more often!”, Minhyuk exclaimed. Kihyun even shouted in English, “I have to see you guys again in Singapore soon!”. “We had a great time because you guys cheer for us despite the hot weather. You guys were waiting even though it was raining. I am very touched!”, Hyunwon added. All the members relay their gratitude and appreciation to all the fans present. 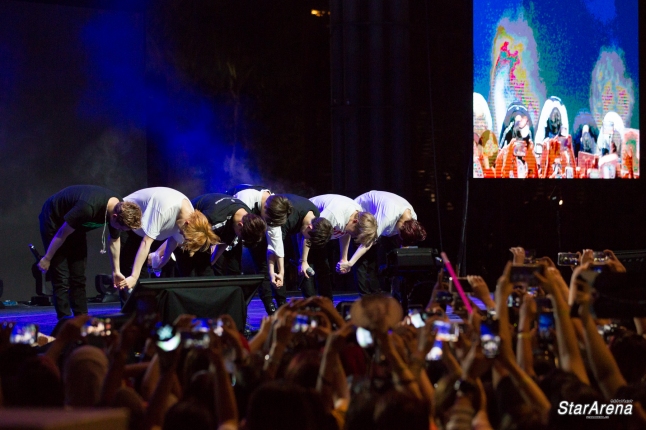 I am sure that the whole concert experience was a dream come true for most of the fans, seeing their idols for the first time. Monsta X definitely does not disappoint as they show amazing stages as well as fun interactions with the fans present. Let’s hope that the members of Monsta X keep their word and will come to Singapore again! Meanwhile, let us all wait for their comeback which will be happening soon!

Click here for more photos of Monsta X at the HSBC Special Show 2018!