Malaysia, 2016 – The surprise move, for the very first time top K-pop boy band EXO will come to Malaysia to perform their full world tour “EXO Planet #2 The EXO’luxion”. This is the group’s second world tour since their debut in 2012 and this long-awaited Malaysia gig is finally announced today to take place at the Kuala Lumpur Stadium Merdeka on March 12th, 2016 at 8pm. The Malaysia gig is also declared the last stop for their 2nd world tour.

EXO was chosen as Top 1 in K-Pop by American Billboard in 2013 and they were also chosen as the biggest influence in Korea by Forbes Korea Power Celebrity in 2014. The boys had accumulated around 4million fans worldwide, sold out concerts for their first and second world tour in Seoul within 1.47 seconds and 0.4 seconds where EXO has become one of the most popular male groups from South Korea.

Jointly organized by Star Planet and IMC Live, presented by SPRITZER Mineral Water, the EXO PLANET #2 –The EXO’luXion World Tour Live in Malaysia 2016 will be yet another breath-taking performance featuring multi-million productions and it is expected to be a full-house show. 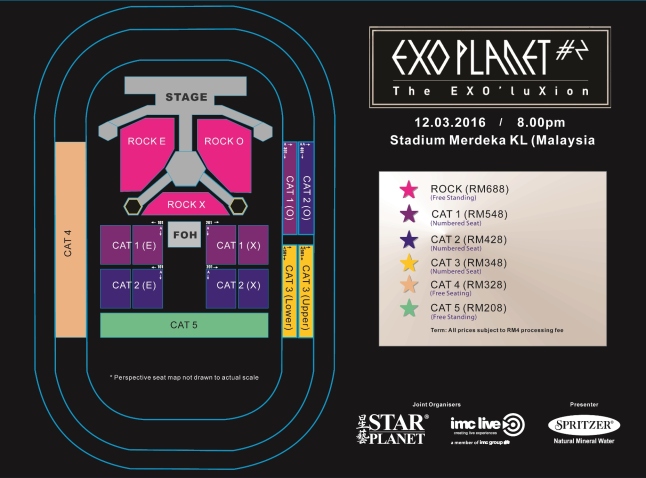 Promotions applicable for tickets transacted during the ticket launch at KL SOGO include:
Note: Payment can be by cash, credit cards of any bank (VISA & MASTERCARD only) or Debit Card

Bonuslink members:
– 15% OFF on 2 tickets if present your membership card upon ticket purchase (applicable for Category 1, 2, 3 & 4 tickets only).

KL SOGO S Card members:
– 10% OFF on 2 tickets if present membership card upon ticket purchase (applicable for Category 5 tickets only)

Star Planet SClub members:
– 10% OFF on 2 tickets if present membership card upon ticket purchase (applicable for all ticket types).
– 3x Reward Points will be granted for every RM1 spent on ticket(s).

Note: All above promotions subject to terms & conditions. Discount is for limited tickets and shall be on first-come-first-served basis.
Each customer is permitted to purchase up to 12 tickets at the ticket launch (Discounted + Normal priced tickets).

– Online booking will be open on 16 January 2016 from 5pm onwards and continues until tickets are fully sold.
– All tickets transacted via online shall be based on full price.
– We accept any credit card (VISA or MASTERCARD) or debit card (MAYBANK & Public Bank only) for Online Purchase.
– Limits to twelve (12) tickets per transaction on 16 January 2016. No limit on ticket quantity on subsequent days.

PURCHASE via TICKET OUTLETS
– Selected ticket outlets in Penang, Johor, Sabah & Sarawak will accept ticket purchase on 16 January 2016 from 11am on full price:
(Note: Limits to twelve (12) tickets per customer)

– All other designated TicketCharge outlets will be open on 17 January 2016 from 11am onwards. No limit on ticket quantity.

General Terms & Conditions:
1. All prices are quoted in Ringgit Malaysia and INCLUDE 6% GST and RM4 processing fee.
2. Customers are only allowed to select seat ZONE and the ticketing system will automatically select the “Next Best Seat” upon purchase confirmation.
3. All discount promotions shall not be used in concurrent with any other promotions.
4. Star Planet reserves to right to any alternation or changes made on all promotions without prior notification.