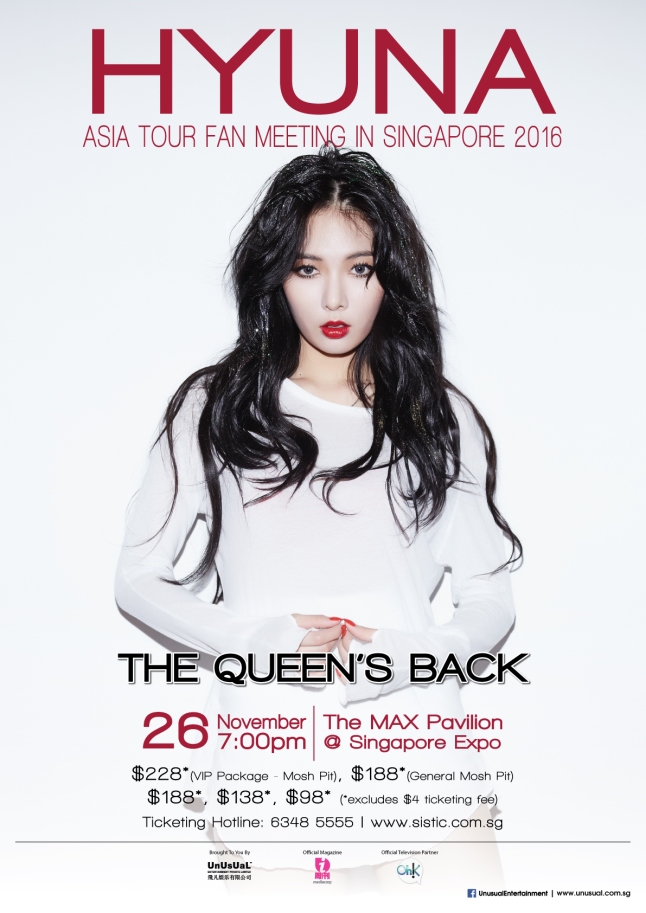 Singapore, 2016 – This November, Korea’s hottest and sexiest female singer, Hyuna, will be in town for her first ever solo fan meet in Singapore, “HYUNA Asia Tour Fan Meeting in Singapore 2016 – The Queen’s Back”!

The fan meet will be held on 26 November (Saturday) at The MAX Pavilion @ Singapore Expo. Tickets priced at $228* (VIP Package – Mosh Pit), $188* (General Mosh Pit), $188*, $138*, $98* (*excludes $4 ticketing fee) will be available for sale through all SISTIC channels from 1st October, 10am onwards. To book, log on to http://www.sistic.com.sg/events/hyuna1116 or call 6348 5555. For more information, visit www.unusual.com.sg. VIP package ticket holders will receive a limited edition pass and lanyard, a concert poster and the opportunity to join Hyuna at the sound check party. In addition, 100 lucky VIP package ticket holders will get the chance to take part in a Hi-Touch session with Hyuna.

Hyuna debuted in 2007 and was one of the original members of the Wonder Girls before she joined 4Minute. Hyuna was only 15 years old when she made her first appearance and instantly won over the hearts of many with her innocent and girlish looks. Over time, Hyuna quickly gained confidence and developed a strong and distinct stage presence that made her stand out in 4Minute.

In 2010, Hyuna took a shot as a solo artist and released her debut single, “Change”, which created a sensation and charted well on various music charts. Following the success, she went on to release her first solo album “Bubble Pop!”. The title track of the same name received tremendous feedback and the music video hit one billion views, making Hyuna the first solo female singer in Korea to achieve more than a billion views for a music video. Riding on her success, Hyuna went on to form a co-ed unit “Trouble Maker” and also starred in PSY’s hugely popular music video “Gangnam Style” which further propelled her rising popularity.

As a solo artiste, Hyuna has matured and taken on a more daring and adventurous route. Known for her sultry on stage persona, Hyuna is the unrivalled sexy queen of K-pop.

To thank her fans for their unwavering love and support, Hyuna has embarked on a fan meeting tour to engage with her fans. After Taipei and Shanghai, she will stopover in Singapore next. The “HYUNA Asia Tour Fan Meeting in Singapore 2016 – The Queen’s Back” is exceptionally meaningful as this is her first ever solo fan meet in Singapore. She will be performing many of her hit songs such as “Red”, “Bubble Pop!” and “Change” and tracks from her latest album “A’wesome”. Not only will fans get to catch Hyuna’s captivating performance live, there will also be games for them to get up close and personal with her. Fans are in for a treat as Hyuna has prepared some surprises in appreciation of their support.

Don’t miss the chance to catch Hyuna’s first ever solo fan meet in Singapore and join her in a memorable evening filled with fun and joy!

“HYUNA Asia Tour Fan Meeting in Singapore 2016 – The Queen’s Back” is proudly brought to you by UnUsUaL Entertainment.