Hong Kong, 2016 –  Rolemodel Entertainment Group (REG) is bringing one of the hottest Korean Pop boy bands, VIXX, again to Hong Kong after last year’s Fan Party in town, for VIXX Live Show in Hong Kong ‘THE UNDERWORLD’ at AsiaWorld-Expo on 18 February 2017. Citibank is offering Citi Clear card members and all other eligible Citi Card members an exclusive priority booking opportunity to purchase tickets starting from 7th to 11th December 2016 before public ticket on sale via all HK Ticketing channels.

Formed by Jellyfish Entertainment, VIXX is a six-member Korean Pop boy band consists of N, Leo, Ken, Ravi, Hongbin and Hyuk. VIXX has tackled many different unique themes and concepts such as “Vampires”, “Black Jack”, “Voodoo Doll”, etc. which made them stood out among other K-pop boy bands. Since their official debut, they have already released 6 Korean singles, 3 mini albums and 2 studio albums with several singles such as “Error”, “Love Equation”, “Dynamite” etc. ranked first on local music charts. On 31 October 2016, “Kratos”, their third mini album was released and loved by their fans. A total of nearly 100 shows or performances were held by VIXX in places other than Asian cities such as France, Germany, the United States of America, Australia, South America etc. extending their popularity to a global level.

VIXX is set to perform their hottest tracks in Hong Kong this time including the brand new singles found in the newly released mini album “Kratos”! Every “ST★RLIGHT” (VIXX’s official fan club name symbolizes fans as sparkling and shining stars and the power source guiding VIXX to move forward to reach their goals) should never miss this chance of witnessing their stunning live performance in Hong Kong. Don’t forget that VIP ticketholders are entitled to join our High-Five Session to have the closest personal touch with all the six members.

REG, a subsidiary of the Korean entertainment group CJ E&M, is proud to present to the Korean music fans their next event of the KLIVE series with VIXX Live Show in Hong Kong ‘THE UNDERWORLD’ at AsiaWorld-Expo this time. The KLIVE series targeted to bring to the K-pop fans an ultimate entertaining experience with intimate interactions with their K-pop idols and there will be a series of exciting upcoming K-pop events extending to other Asian cities! 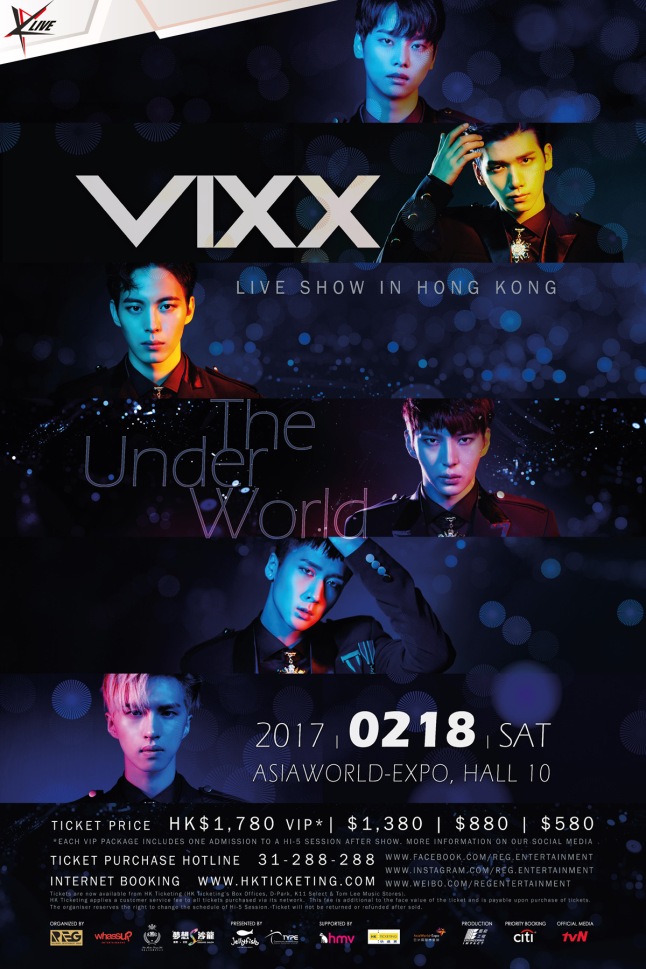