With the March holidays approaching, I’m sure many would like to catch up on your reality/variety shows, but probably not sure which to watch. Well, don’t worry we got you covered! We have listed 5 variety and reality shows that we are sure you would enjoy!

There ought to be a reason why this popular variety show has existed for 10 years! It is that good! If you need a good laugh, you will not be disappointed. I personally like Season 3 the best. It is nice to see the development of the 6 cast members’ friendship and camaraderie.

Episodes to begin with: I highly recommend starting from the first episode and moving on from there as you will be able to see the dynamic that is formed over time. But if you insist, I recommend – The Manly Trip (Ep 9 & 10), The Quit Smoking Project (Ep 15 & 16), Summer Vacation to Balri (Ep 82 & 83).

If you have not started on this show, you need to start now! They had a few set changes at the beginning before they decide to stick with the school concept. This talk show is set in a classroom, where each episode, “transfer” students (aka guests) come and appeal themselves to their “new classmates”. Because of this classroom setting, everyone is supposed to talk informally (and casually) with each other. The ruthless verbal attacks between each cast members are the funniest part of the show!

Episodes to begin with: I have to admit, some episodes are more entertaining than others, I recommend starting with episodes with your favorites as guests. Then slowly moving on to the next episodes. To start, I would recommend, Ep 18 (Eun Jiwon, Noel), 31 (Seo In Young, Jessi, Kim Jong Min), 46 (Infinite), 64 (Kang Ye Won, Han Chae Ah).

What could be cuter than seeing a show filled with kids? A show filled with cute kids and struggling fathers taking care of them! Which is what this show is all about! The hilarious antics of the toddlers paired with the (clueless) fathers who try their best to provide for their kid, makes this show really heart-warming and pretty adorable.

Episodes to begin with: Honestly, I’ve never missed an episode and I like all of the families equally from the bottom of my heart, butttt if I have to choose, I would recommend paying special attention to Haru (Ep 1 – 58), the Song triplets (Ep 34 – 116), Daebakie and his sisters (Ep 88 – present) and of course, the Lee twins (Ep 1 – present). 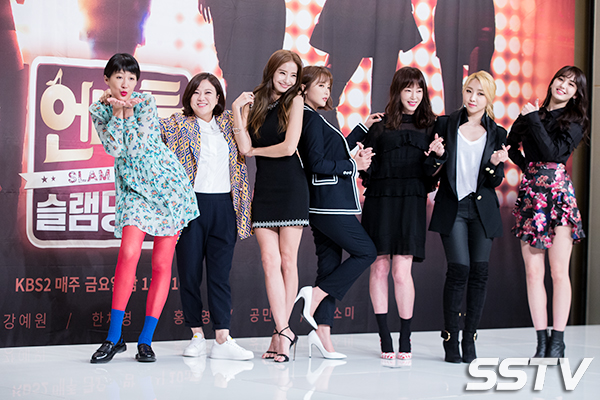 From the person who only watched the girl-group making episodes in Season 1, I was pleasantly surprised when Season 2 would just be centered around recreating a girl group. It was, arguably, the most interesting and entertaining portion of Season 1. So I understand why they decided to steal Min Hyorin’s dream and make the whole Season 2 based on that.

And honestly, I am really enjoying it ! It has only 5 episodes so far, but I am starting to feel attached to them as a group and I love their group dynamic! I must say, the group dynamic is slightly better than Season 1’s! Even though the age group might seem larger (Somi is only 17 y/o say what!), I think the young ones really blend well with the “matured” ones.

Episodes to begin with: Well, there are only 5 episodes as of now so go and catch up!

5) Law of the Jungle

Scripted or not, the show is still really very entertaining! The different casts going on different islands proves to be refreshing as we see the interaction between idols, singers, actors and comedians all in a survivor-style show. It is pretty interesting to see the casts “raw” and trying all sorts of new (and honestly scary sometimes) activities – like catching a chicken, climbing trees, fishing for food, building a home, etc.

And that’s the list of variety/reality shows that I have enjoyed recently! If you have not started on any of these shows, go start on it soon! If you share the same sentiments as me, hi-5 sista! Now it’s time to cuddle up on a bed, and laugh and cry and laugh even more while watching these shows. You can thank me later 😉