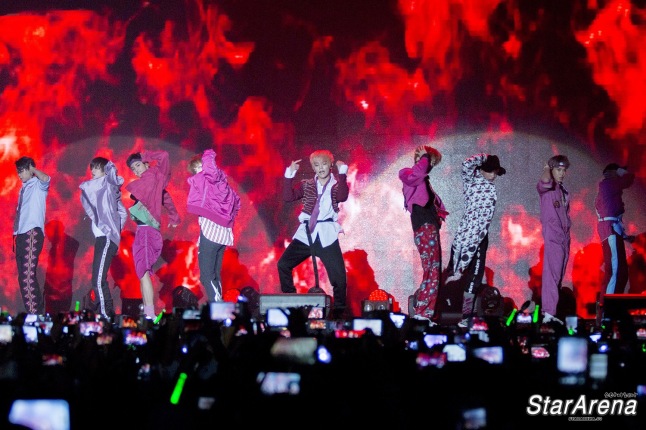 Jakarta, 2017 – NCT127 surprised their fans by performing in Indonesia at Spotify On Stage, held at Jakarta International Expo (JIExpo) Hall C3, on 9th August. Taeyong, Johnny, Yuta, Doyoung, Winwin, Jaehyun, Taeil, Mark, and Haechan came as a full team and was prepared to drive more than 7000 audiences crazy that night!

The venue was in chaos when they began their performance with their debut song, ‘Firetruck’, followed with ‘Limitless’. They also interacted with fans by introducing themselves in Bahasa Indonesia. “Halo, nama saya Haechan. Apa kabar? (Hello, my name is Haechan, how are you doing?)” The youngest member of NCT127 greeted audiences with his cute Bahasa Indonesia, gaining screams from the fans.

Johnny delivered his concern over fans’ safety in the pit, Taeyong also asked the translator to tell fans to have fun but to keep each other safe as well. Jaehyun told fans his excitement for this concert because this was their first time performing in Indonesia. He added that they have prepared a surprise exclusively for Indonesia fans; which is a big heart shape from each member! “We’ve practiced hard for this stage, so please cheer for us!” Taeyong said before Johnny introduced their next song, ‘Good Thing’.

The venue got hotter after NCT127 performed ‘0 Mile’. “Are you guys having fun?” Audiences shouted ‘yes!’ at Taeyong’s question. “Please scream for us! Indonesia fans are really fun!” Other members nodded excitedly and gave their thumbs up, earning more screams from audiences. Johnny also told members that he was glad NCT127 is getting closer with their Indonesian fans.

Each member also expressed their gratefulness to audiences and their fans for coming to watch them at Spotify On Stage. Doyoung then reminded his members, “Didn’t we have something for Indonesia fans?” Taeyong and Jaehyun once again made a big heart with their arms, showing their love for Indonesia NCTzens.

“Time flies really fast, and our stage have come to an end. Terimakasih!” Taeyong closed their talking segment before giving the last performance, ‘Cherry Bomb’.

Spotify On Stage is a free music festival held by Spotify made to connect artists with their fans and listeners. This concert was made based on data and traffic of popular playlists, resulting artist lineup consisted of NCT127, AmPm, DNCE, Afgan, Dipha Barus, Isyana Sarasvati, and Raisa for its first concert in Indonesia. Following this successful event, Spotify is also preparing for similar events in US and UK.

We would like to thank Spotify Indonesia for the invitation to cover this event.