Jakarta, 2017 – KOTRA (Korea Trade Investment Promotion Agency) opened a two-day event ‘Korea Brand & Entertainment Expo’ (KBEE) at Sheraton Hotel, Gandaria City Hall, Jakarta, on September 4. This is the first time KOTRA is holding this annual event in Indonesia to enhance business collaboration and investment between the two countries. As the ambassadors of KBEE, Super Junior D&E (Donghae and Eunhyuk) and actress Song Jihyo also came to promote the event as well as to greet their Indonesian fans.

The event began with opening speeches by a number of head of government institutions, such as Lee Taesik as Vice President of KOTRA and Cho Tai-young, the Ambassador of Korea for Indonesia. In honor of their participation to promote bilateral collaborations, Vice President Lee awarded Song Jihyo and Super Junior’s Donghae and Eunhyuk as official ambassadors of KBEE. Together with other honorary guests, they officially opened KBEE in Jakarta.

Song Jihyo came to the stage to greet the audience and talk about her experience as KBEE’s ambassador. She expressed her excitement upon promoting medium-small scale businesses and their top-notch products and hoped that this event could boost business collaborations with Korea’s partner countries, especially Indonesia. With regard to places in Korea that she would like to recommend to those who are interested in visiting Korea, she mentioned Myeongdong area in Seoul as a good place for shopping, but she also recommended beautiful beach lines such as Jeju Island and Nami Island. She also gave packages of products that she personally uses for her skin care routines to 4 lucky winners. At the end of the event, she signed the packages on the stage and gave warm hugs to each of the winners as a thank you gift for coming to support this meaningful day. 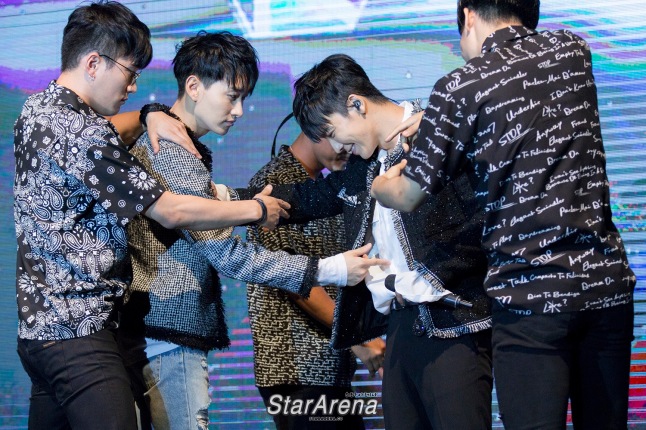 Donghae and Eunhyuk, who have just been released from the Korea military a few months ago, got cheered on by their fans as they began their performance with ‘Growing Pains’. They greeted fans with Bahasa Indonesia that they practised and announced that their upcoming album would be released soon, hoping that fans will give it a lot of love. They continued burning the venue with ‘Still You’, ‘I Wanna Dance’, and ‘Oppa Oppa’. The fans went crazy when they jumped from the stage to get closer to the audiences, leaving deep impressions to everyone who came and watched their performances that day. Check out the video of Super Junior D&E’s ‘I Wanna Dance’ and ‘Oppa Oppa’ performance below!

We would like to thank KOTRA and BIK Communications for the invitation to cover this event.