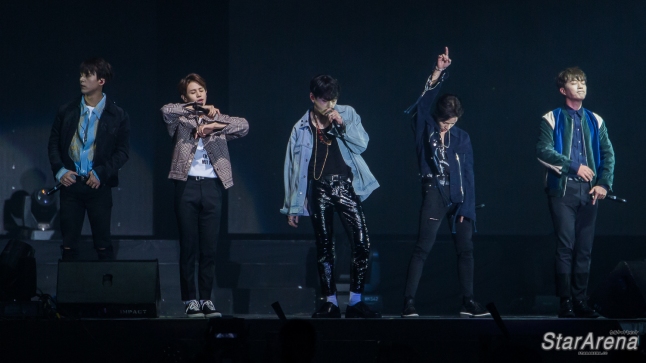 Songs that were sung were all  songs that fans know by heart. They began the fanmeet with ‘Good Luck’ followed by ‘Yey’ and ‘I think I love you’. Fans were evidently mesmerised by  BEAST’s dance movements from the start.

The next segment was the introduction by the members using Cantonese. Even though they weren’t fluent in Cantonese and stumbled during their self-introduction and greeting,  b2uties were touched by the members’ effort in doing so.

‘In Rainy Days’ was the next song BEAST performed. The screens were all displaying rain scenes and that set the mood just right in the arena. When it was time for ‘Butterfly’, fans threw their pre-folded paper planes towards the stage as a surprise for BEAST and it was indeed a very enchanting scene.

When the introduction of ‘Ribbon’ was played, the fans already knew that it was the BEAST’s latest hit and was cheering since the start of the song!

During game time, the members and 5 lucky fans (comprising of fans from Hong Kong, China and Thailand) had a a great time. The aim of the game was to kick a ball consecutively for as many times as they can and the leader of BEAST, Doojoon, managed to obtain 19 kicks, Maknae Dongwoon could only do twice with his head but the fans were pleased with his effort. On the other hand, Yoseob and Junhyung performed passing of the ball instead. Lastly, Kikwang demonstrated his awesome skills in front of everyone as well!

The organizers of this fan meet even prepared a few ugly/funny masks for each member to put on, igniting laughers from all of the fans.

‘Shock’ was up after the game. As everyone was familiar with the song, it because a big sing-along session! Next was ‘Beautiful Night’ and the members proceeded with their goodbye greetings.

Dongwoon: I hope we can meet you guys again with a concert! Thank you everyone!
Kikwang : Hong Kong b2uties are always so passionate. I love everyone! Hope everyone enjoyed themselves!
Doojoon: It was a long time since we met everyone. Thank you so much! Hope we have a chance to meet you guys again, be it during concert or some other form of performance.
Yoseob: Unfortunately, time passed really fast but it was because everyone was every happy!
Junhyung: How was the show? Good? Would you wait for us until next time? Would you wait for me? I will be with you always. Would you wait for beast? (b2uty said yes ) Thank you, see you soon!

Fans then lifted up their hand slogans during ‘How To Love’. Dongwoon even pick up one of the slogan and held it up too!

We would like to thank Rolemodel Entertainment Group and the team at Freez for the invitation to cover this event!