Singapore, 2017 – On September 23, actor Kim Myung Soo or better known as L, the visual of popular boy band Infinite came to Singapore for an exclusive fan meeting to talk more about his recent solo activities as well as to interact with Singapore fans.

Looking dapper as always, he started off the fan meeting with a ballad, showing off his powerful yet soulful voice. After the ballad, he then had a seat to talk more about his recent, historical drama, Ruler: Master of the Mask.

L was well known to have worn a mask during a good amount of time during the drama. When asked if it was hard to act with the mask on, he shared, “The mask was very heavy. But when I remove the mask, I think my facial expression was more detailed.” Since this is his first attempt at a historical drama, he said it is very important to take note of the way he talks, the posture as well as the facial expressions. 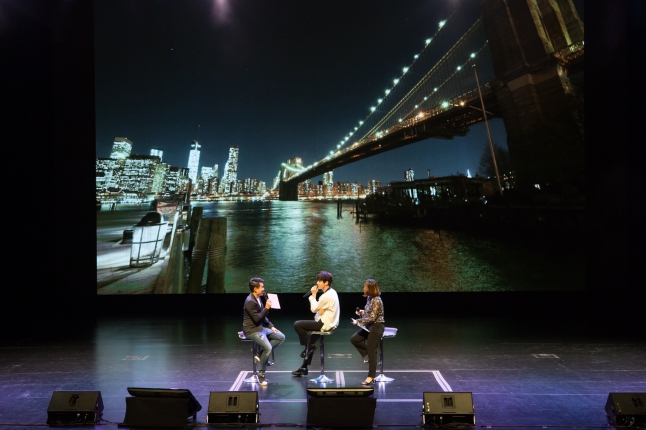 When certain scenes of his acting were shown, L couldn’t stop laughing and at times, stared at the screen obviously in awe at his own acting. Showing how busy he was during the drama, he shared, “I didn’t have time to follow up with all the episodes because I was so busy preparing for the drama.”

His hard work and diligence were obviously not gone to waste as he was awarded the Actor of the Month by MBC in the month of June! He brought laughs to the audience as he exclaimed, “Appuden!” a Singlish word he learned earlier which means “Of Course!”

The fan meeting was obviously not all talks. He even played games with some lucky fans! The fans and him, get to reenact some of the more popular scenes of the drama. After each reenactment, L showed how lovely he is by hugging each one of the fans. Which I’m sure got all the girls (and guys!) in the crowd jealous.

His devoted fans probably know that L has a hobby of taking pictures wherever he go! Hence it is no surprise that he took a few snaps while he was in Singapore! He shared some of the pictures he took and dare I say, he’s quite skilled!

Despite being sick, he still managed to squeeze in a meal of chili crab during his stay here. He, however, exclaimed, “I miss the pepper crab!”, showing how much he really like our local delicacies.

During one segment of the fan meet, he even gave advice to his fans. Amusingly, one fan shared how her cat doesn’t look excited whenever she’s home. Even though he laughed, L gave (serious) advice as a cat owner and explain how you should treat your cat to show that you love them.

Towards the end of the fan meeting, a special video made by the fans was played. As he watched silently, you can see the smile creeping on his face. After the video, L exclaimed how thankful he is to all his fans. “I always feel weird watching all these fan videos because it makes me think if I’m worthy of all these love and support,” he shared.

Before he left the stage, he promised once again that he’ll be sure to come back to Singapore. I’m sure that the fans take his word for it and are already waiting for the next time L comes to sunny Singapore again!