Hong Kong, 2017 – Celebrating their 68 years of independence, artists from China, Korea and Hong Kong were invited to perform at this year ‘National Day Youth Concert in Hong Kong’. END_OF_DOCUMENT_TOKEN_TO_BE_REPLACED 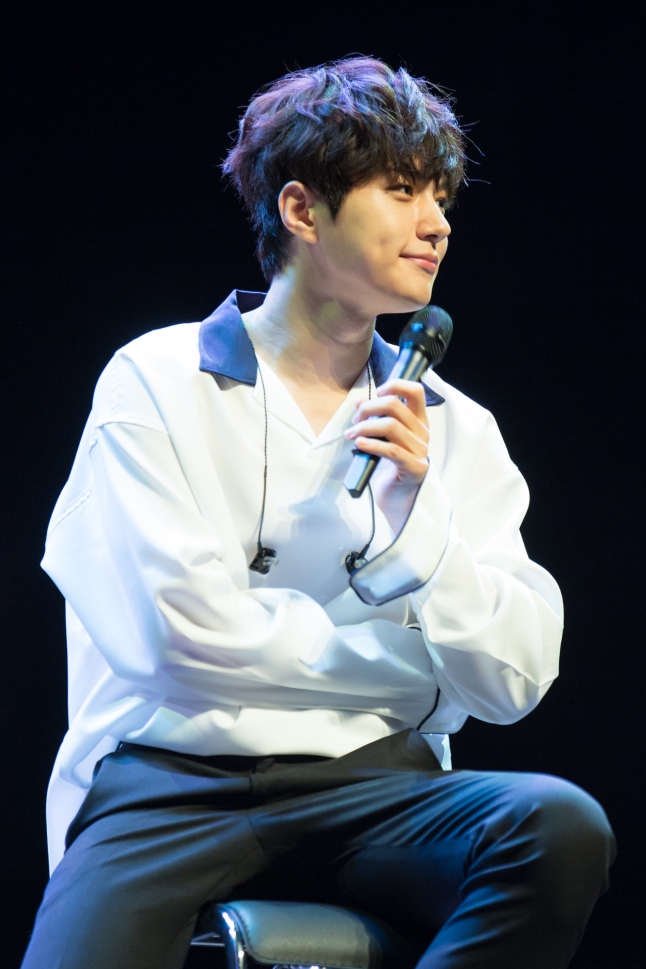 Singapore, 2017 – On September 23, actor Kim Myung Soo or better known as L, the visual of popular boy band Infinite came to Singapore for an exclusive fan meeting to talk more about his recent solo activities as well as to interact with Singapore fans.

END_OF_DOCUMENT_TOKEN_TO_BE_REPLACED

Hong Kong, 2016 – INFINITE, one of the hottest boy group in K­­orea gave Hong Kong Inspirits an exciting performance on 31st January 2016 at Asia World Expo. They kick started their concert, ‘2015 INFINITE 2nd WORLD TOUR INFINITE EFFECT’, with explosive hits like Before the dawn, Paradise and Be mine.

During the self-introduction segment, each member used fluent Cantonese to introduce themselves and Hoya who spoke fluently in English, resulted in huge cheers among the fans.

After Destiny and Tic Toc was the second talking segment where Infinite asked Inspirits if they liked the album, Reality, which was released last year. They added on that they wanted to write more and better songs for the fans and hope that for the next album, it could be produced together with inspirits. The following song after the speech segment was dedicated to the fans: Love Letter.

All members walked to the extended stage and threw their signed coloured paper planes to lucky inspirits.

Next up was Everyday, fans present started to raise the slogan which read ‘Woo Hyun Happy Birthday’.

When it was time for Sorry I’m busy by Infinite H, atmosphere heated up. Hoya and Dong Woo showcased their rap skills respectively at each side of the stage. Dong Woo even removed his jacket, leaving only his tank top on, gaining all the screams from the fans. What came up next was Pretty; Dong Woo demonstrated a difficult dance choreography, bringing the excitement and tension to a whole new level.

Everyone raised a yellow slogan when it was time for Infinite’s leader, Sung Gyu’s stage to perform Kontrol.

Infinite F, which consist of L, Sung Jong, Sung Yeol was dressed in polka dotted jackets while performing Heart Beat, making them as cute as the style of the song. During the song, Sung Jong even carried Sung Yeol and the three of them each took a basket of dolls and gave it to the fans.

Dong Woo mentioned that his parents was present at the concert. He also added that the song Sorry I’m busy that they performed was composed and written by Hoya. Hoya requested the fans to wait a little longer for his next work! Sung Gyu also hope that everyone would like the Solo album <Kontrol> that he released last year.

L added that next time when they are back in Hong Kong, they will be performing something new for Inspirits in Hong Kong. Hoya also mentioned that Hong Kong fans are really passionate.

Next up were songs which were light and fast paced, Nothing’s Over, Entrust, Cover girl and Moon Light.

A birthday cake was prepared for Woo Hyun as it would be his birthday soon. That made him really touched and happy. After the birthday celebration segment, Infinite perform their all time fast hits, Back, The Chaser and Bad.

Before encore, inspirit keep on screaming 돌아와 (meaning to come back in korean). And of course, Infinite came back to take the stage, looking even better than before with suits. While everyone was singing Together, Inspirits raise their slogans. Sung Gyu even used Cantonese to wish everyone Happy Lunar new Year and to have a prosperous year ahead.

All members bowed hand in hand and thanked all the fans at the concert, marking the end of another unforgettable concert for both Infinite and fans in Hong Kong.

INFINITE is returning to Singapore to meet their supportive fans! Since releasing their new mini album, “Reality” in July, the septet embarked on their journey to tour their second headlining solo world tour, INFINITE EFFECT. With the impending “2015 INFINITE 2nd WORLD TOUR [INFINITE EFFECT] IN SINGAPORE”, INFINITE expressed their excitement in meeting their fans.

Since their debut in 2010, INFINITE has produced numerous hits such as, “Be Mine”, “BTD (Before The Dawn)”, “Bad”, “Love Letter”, “Last Romeo”, and “Back”. Inspirits! Be prepared for the spectacular performance specially prepared by the septet!

Join INFINITE for a night of stellar performance at the upcoming “2015 INFINITE 2nd WORLD TOUR [INFINITE EFFECT] IN SINGAPORE” this November, 13th.

Public Sales for tickets will commence on 29th September 2015 (Tuesday)10am SGT on all SISTIC platforms/outlets.

Also, check out the greeting video from INFINITE!

ONE to air prime-time dramas within 24 hours from its premiere in South Korea!

Singapore, 18 May 2015 – ONE, the number one Korean entertainment channel in Singaporet, is bringing the spirit of “PPALI-PPALI” (pronounced as ‘pah-li pah-li’) – the commonly-used Korean phrase meaning “quickly” – to the television screen.

The PPALI-PPALI show time on ONE will begin this month, showing the latest, prime-time drama offerings from top South Korean broadcasting network Seoul Broadcasting System (SBS), within 24 hours of their original broadcast.  The dramas will air with localised subtitles, to complete the drama-watching experience for viewers.

To accommodate this exciting new development, the mini-series time-belt on ONE, which was originally from Mondays to Thursdays, will now be shifted to Tuesdays to Fridays, at 8.55pm/7.55pm (JKT).

The PPALI-PPALI show time will kick off with Mask, a melodrama about a woman who assumes another’s identity and enters the elite “chaebol” (a family-owned industrial conglomerate) world.  Standing out from the other aristocratic ladies, she captures the eye and eventually, the heart, of a charismatic but repressed young heir.  Mask features a star-studded cast including veteran, international award-winning actress Soo Ae (King of Ambition), leading heartthrob Joo Ji Hoon and Hoya (My Lovely Girl), a member of Korean pop group INFINITE.  Mask is set to premiere on 28 May, within 24 hours of its Korean telecast.  New episodes will air every Thursday and Friday at 8.55pm/ 7.55pm (JKT), first and exclusively on ONE.

Also airing soon on the PPALI-PPALI show time is True Romance, a heartwarming story about a young woman who – despite her luxurious, privileged background – decides to take on a part-time job at a food market so she can find a man who truly loves her.  True Romance boasts a colourful ensemble of young Korean stars, including After School’s UEE, Sung Joon and ZE:A member Park Hyung Sik. True Romance will premiere on 9 June, within 24 hours of its Korean telecast.  New episodes will air every Tuesday and Wednesday at 8.55pm/ 7.55pm (JKT), first and exclusively on ONE.

“As the pioneer and the leading Korean entertainment channel in the region, ONE has always served up the best the industry has to offer, to the fans here.  We are thrilled to be the first to bring, not 1 but 2 of the latest South Korean prime-time drama series to audiences within 24 hours of their airing, as part of our commitment to presenting fresh and top-rated content to our loyal viewers.  The Korean wave is well and truly alive in Southeast Asia, and we believe the PPALI-PPALI show time will take it to the next level,” says Ms Virginia Lim, Vice President of Content & Marketing for Sony Pictures Television Networks, Asia.