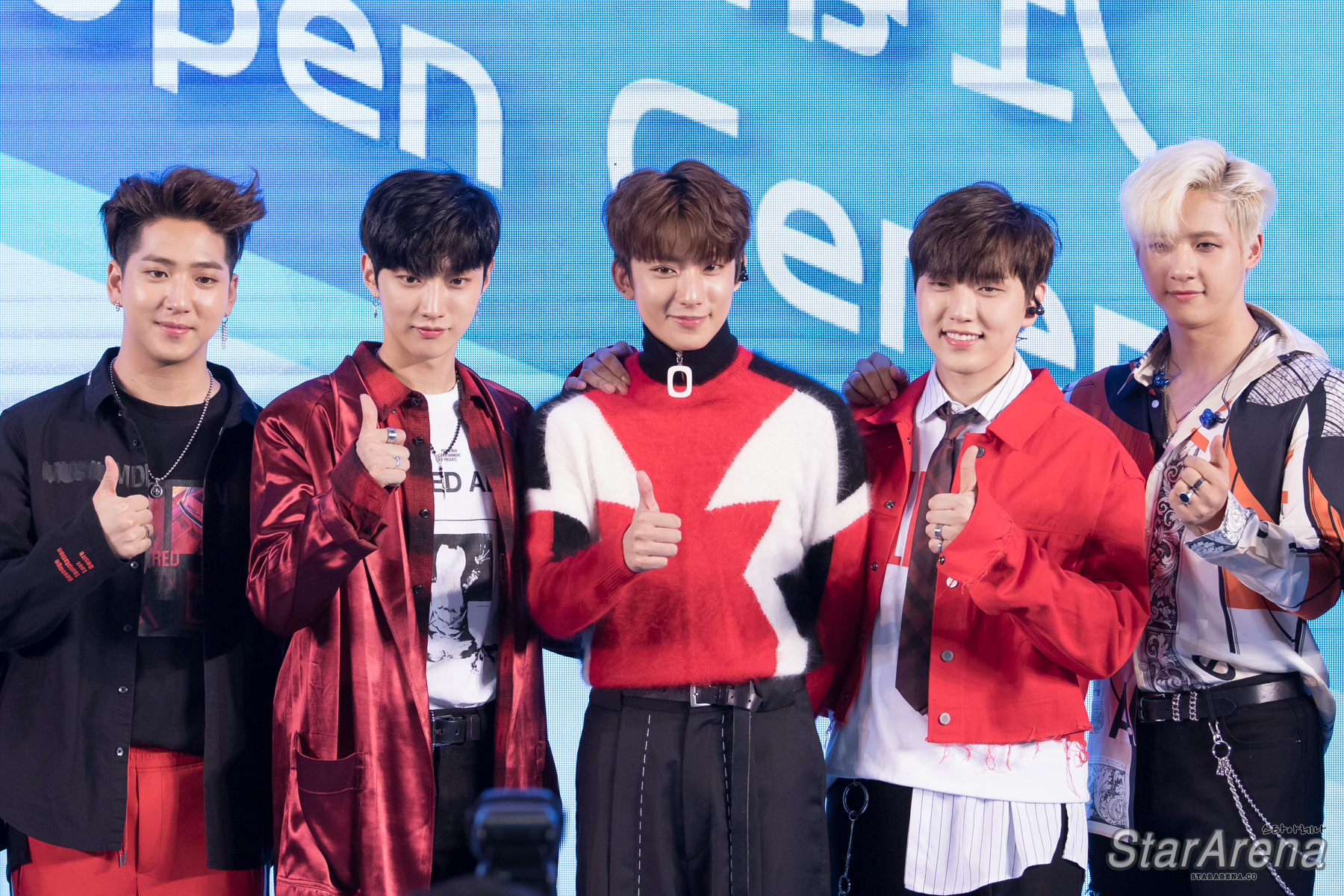 END_OF_DOCUMENT_TOKEN_TO_BE_REPLACED

The third city to be held is Singapore, starting December 19 at Singapore EXPO.

This is the first overseas expansion since the 9th opening SGC SUPER LIVE in Tokyo and the organising company said, “Because of the top famous artist held on SEOUL GIRLS COLLECTION (SGC SUPER LIVE), we received questions about ticketing from not only Korean fans but from the fans overseas”. They added, “We decided to open SGC SUPER LIVE world tour on the second half of the year in response.”

SEOUL GIRLS COLLECTION Show, celebrating the 12th anniversary by SGC SUPER LIVE IN Singapore, is an entertainment show focused on the trend and presenting a new approach to fashion and K-pop. And planned to introduce the excellence of the nation’s fashion brand by performing K-pop concert in collaboration with 10 to 30’s young woman’s ‘Real Clothes’ concept, presenting domestic and foreign famous brands and street fashion at the same time.

Many top K-pop artist will be performing at SGC SUPER LIVE in Singapore. Eye of the K-pop storm, Super Junior’s LeeTeuk has been selected as the special MC for the show in Singapore. WooJoo Star, Kim Hee Chul and talented musician Jungmo would be showing their collaboration. Henry, Korea famous hiphop idol Block B, hot-issue idol B1A4, sexy model idols Nine Muses and Korea’s rookie hip-hop group Toppdogg will also be joining this spectacular show of SGC SUPER LIVE in Singapore.

Audiences can enjoy various artist’s performance and fashion show at the same time in a  20~30 minute mini concert format SGC SUPER LIVE. Fans of the participating artists can also anticipate and enjoy their performance.

‘SGC SUPER LIVE’ was planned by ‘Seoul Girls Collection‘ to introduce the excellence of the nation’s fashion brand. And was awarded 1 million dollars export award by the Korean Trade Association.

In addition, entry into the concert venue would be according to the entry number stated on the ticket.

‘SGC SUPER LIVE IN Singapore’ is organized by ‘Seoul Girls Collection‘.
For more information and updates, please check out the ticketing website, www.sgcent.com. Also, do follow SGC on their twitter (https://twitter.com/SGC_Twt) and facebook (https://www.facebook.com/seoulgirlscollection).

B1A4 recently did a comeback with a young, fresh and mature mature with their new album, ‘Sweet Girl‘. In their newest MV which was release on 10th August, the five members of B1A4 transformed into 5 lovely boys in a fairytale-like world. The scenes in the MV were so beautiful and captivating and it definitely made fans squealed with excitement and anticipation.

It was said that Members of B1A4 took part in the production of this new album, ‘Sweet Girl‘, with the title song ‘Sweet Girl‘ narrating a confession after falling in love with a girl one has met for the first time. The style of this song is funk-like with a tinge of sweetness and gentleness. Even before this song was released, it was voted by Koreans youths (aged 10-19), as the song that they listened to the most from 4th Aug 2015 to 11th Aug 2015. Another song that has been in the focus of attention was ‘10 years later‘. This particular song narrated the feelings B1A4‘s leader, Jinyoung, felt during the period before comeback and his thoughts on how he would like to become 10 years later. It expressed his wish to make good use of his time now to achieve his goals and live a fulfilling life.

In the recent recording of ‘2015 Idol Star Athletic Championship‘, B1A4 purchased 200 packaged meals to thank fans that came to recording and also for their unwavering support for B1A4 all these while. In B1A4‘s recent comeback posters, it hinted several upcoming events and interaction opportunities fans can get with B1A4. Let’s all anticipate the surprise B1A4 have for their fans!

Artistes such as Hyuna (4 Minute member) and Jessica (former Girls’ Generation Member) have uploaded and shared this album with their followers, encouraging them to listen and support B1A4‘s newest album/songs.

In this comeback, the youngest member of B1A4, Gongchan, left his cute image behind and showed his toned and well-trained body, which pleasantly surprised many fans.

It is no debate that B1A4 is a group of warm-hearted boys and in the recent unfortunate incident in Tianjin, they immediately expressed their concerns and prayers for those affected by the incident. This definitely substantiated the fact of how good-natured and kind these lovely boys are!

Singapore, 17 October 2014: Asia’s leading M.I.C.E company Sphere Exhibits and the Embassy of Korea proudly present the inaugural Kstar Fanfest, Singapore’s biggest K-pop fan celebration and the grand finale of the two-month long Korea Festival. Headlined by the hottest of Korea’s new wave of pop powerhouses, the two-day spectacular is slated to take place on 21 and 22 November 2014 at the Marina Bay Sands Convention Hall. It’s the first time K-Pop stars are being brought together with celebrity fans from Singapore’s social media scene, including Deekosh, Rachel Wong, Evelyn Quek, and Sylvia Tham to share and spread the Hallyu excitement.

Centred around what fans want and crave, eventgoers can expect nonstop excitement and unprecedented access to their idols. Fans can catch a rare glimpse of their idols at work before the performance at the soundcheck party; while free ticket upgrades, a hi-five session and personalised premiums are just some of the other things lined up to bring the Kstars a little closer to those who just can’t get enough of them. A trip to Korea including backstage passes to Music Studios in Korea is also up for grabs in a lucky draw. In addition to the two-day lineup, pre-event discounts, contests and promotions will also be announced on the official website (www.kstarfanfest.com) and supported by shoutouts from other Singaporean bloggers such as Miyake Ng, Yutakis James, Chloe Choo and more.

Kstar Fanfest is the grand finale of Korea Festival 2014, which is in its second edition this year. Launched on 24 September, the two month-long festival is a run-up to the ASEAN- Korea Commemorative Summit this December in Korea and next year’s 40th anniversary of Singapore and Korea’s diplomatic relationship. Korea Festival aims to promote friendship between Singapore and Korea by showcasing 12 world-class events featuring the best of modern and traditional Korean culture, content and industries. The two-day finale on 21 and 22 November features Kstar Fanfest as well as a separately-ticketed section with a host of exciting exhibitors, happenings and giveaways.

These include a fashion show by Korean label Lapalette, tech showcases of the latest mobile and electronics from Samsung and LG, Korean street delicacies from Korean buffet restaurant Todai, snacks from confectionery giant Lotte, car showcases and special offers from Kia, fun games and activities with attractive prizes from the Korean Tourism Organisation, sports events, Tae Kwon Do demonstrations, K-pop dance competition finals, and exhibitors such as Innisfree, Naver Line and much more.

1. Book tickets conveniently through the official website: http://www.kstarfanfest.com
2. Visit any of the authorised agents and event partners located in Singapore to purchase your tickets from 27 Oct 2014 onwards. While stocks last. Payment by cash, NETS and all major credit cards.

K-pop Afterparty
21 November, 10.30pm – 12am, Marina Bay Sands Convention Hall C
After the music showcase, the arena will turn into a massive K-pop dance party complete with a Korean Guest DJ and K-pop dance tracks. Open to VIP and Premium ticket holders only.

Hi-five Session
Right after the music performances, VIP ticket holders will be invited to come up onstage and give their idols a friendly hi-five, giving them the chance to touch them for a precious moment.

VVIP Backstage Passes
VIP ticket holders stand a chance to win exclusive VVIP backstage passes via fan contests and meet their idols face-to-face. VVIP passes are invitation-only and are not open for sale.

Ticket Upgrades
Every week, two lucky Premium and Superior ticket holders stand a chance to get bumped up to the next-highest category via contests on official social media channels, Facebook, Instagram and Twitter.

Artiste Q&A
Fans can submit their questions on Facebook to Girl’s Day and B1A4 separately. The three questions which gather the highest number of likes for each band respectively will be answered at the event. These lucky fans will each receive exclusive Girl’s Day merchandise on stage.

Weekly Giveaways
Weekly contests are held until the event on Facebook and winners stand to receive exclusive Girl’s Day and B1A4 merchandise.

Kstar Fanfest Lucky Draws
Ticket holders from all categories are automatically entered into a lucky draw to win Kstar merchandise and a trip for two to Korea including a pair of return air tickets and backstage passes to Music Studios in Korea. Draws will be conducted during both music events on 21 and 22 November.

Korea Festival Lucky Draw
Open to the general public. Simply subscribe to our newsletter on http://www.kstarfanfest.com and like/follow all our social media platforms and stand to win the latest Samsung Galaxy gadgets and more from the participating brands.

For more information, do visit http://www.kstarfanfest.com and follow https://www.facebook.com/kstarfanfest for updates!

Korea Festival Singapore and Kstar Fanfest 2014 is proudly brought to you by Sphere Exhibits, presented by The Embassy of the Republic of Korea, supported by Korea Tourism Organization, and promoted by Advocate Pte Ltd.